I spent most of my day yesterday responding to people’s inquiries about what I thought about Invisible Children’s Kony2012 campaign that has been spreading virally around the world in recent days.  The strong statements of support that the video and campaign were getting from all corners certainly caught my attention.  After I watched the film, however, I became incredibly disheartened by what seemed like people simply jumping on the bandwagon, without taking a more critical look at both the message and the means.

Throughout the day yesterday, however, I began to find more and more thoughtful critiques.  This critical voice has also grown significantly, and a lot of people are pointing out some of the glaring problems with Kony2012 campaign.  A friend asked me if I could pull several of these critical pieces into one blog post, to support people interested in reading them.   I am working on writing my own response to the campaign, which I hope to post soon.  But for now, here are some of the ones I’ve found that I think do an excellent job of bringing a critical eye to the campaign’s message and process.

Take a look at some of these articles, and let’s help each other move away from the trap of thinking we need to be anyone else’s savior.  Instead, let’s focus on seeing, learning from, and supporting the incredible good already present within the cultures and communities we want to help.  Fambul Tok is a powerful example of what happens when those most impacted by a war — even the most brutal one — are given the time and space to lead in their own peacebuilding and reconciliation process. 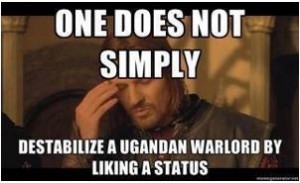 from a photo shared by Misha Tulek on Facebook

A LOOK AT SOME CRITIQUES OF KONY2012:

http://www.theatlantic.com/international/archive/2012/03/the-soft-bigotry-of-kony-2012/254194/:  “The much-circulated campaign subtly reinforces an idea that has been one of Africa’s biggest disasters: that well-meaning Westerners need to come in and fix it. Africans, in this telling, are helpless victims, and Westerners are the heroes. It’s part of a long tradition of Western advocacy that has, for centuries, adopted some form of white man’s burden, treating African people as cared for only to the extent that Westerners care, their problems solvable only to the extent that Westerners solve them, and surely damned unless we can save them… We sometimes mistake our position at the top of the global food chain as evidence that we’re more capable, that our power will extend into complicated and far-away societies, that we’ll be better at fixing their problems than they are.”

http://www.theatlantic.com/international/archive/2012/03/solving-war-crimes-with-wristbands-the-arrogance-of-kony-2012/254193/: “Perhaps worst of all are the unexplored assumptions underpinning the awareness argument, which reduce people in conflict situations to two broad categories: mass-murderers like Joseph Kony and passive victims so helpless that they must wait around to be saved by a bunch of American college students with stickers… Even under horrific circumstances, people are endlessly resourceful, and local actors understand their needs better than outsiders. It’s good that Americans want to help, but ignoring the role and authority of local leaders and activists isn’t just insulting and arrogant, it neglects the people who are the most likely to come up with a solution to the conflict.”

http://www.youtube.com/watch?v=KLVY5jBnD-E: A must-see.  A young Ugandan woman responds to Kony2012 in this 6-min video.

http://innovateafrica.tumblr.com/post/18897981642/you-dont-have-my-vote: “We need approaches that are strategic and respectful of the local reality, build on the action and desires of local activists and organizers, and act as partners and allies, not owners and drivers.”

http://ericswanderings.wordpress.com/2012/03/08/a-ugandan-acholi-perpective-on-joseph-kony-and-stop-kony-2012/: One view from a northern Ugandan — “To present the full situation and its complexities, it takes time to encounter and listen to the narratives and perspectives of the victims in the regions affected by the LRA activities. This has not been done. Besides this, Kony 2012 is heavily laden with old clips that do not in any way represent the situations in northern Uganda at the moment.”

http://www.netfamilynews.org/?p=31322: OK, admittedly we especially like this one because it points out that we are a living example of the possibilities of working in a different way! “Maybe, with the criticism it’s getting, Invisible Children will help its supporters shift the focus from getting “the bad guy” to real solutions like the work of conflict resolution activists in Africa – for example, Fambul Tok in Sierra Leone, which really needs to go viral.”

http://justiceinconflict.org/2012/03/07/taking-kony-2012-down-a-notch/: “The campaign reflects neither the realities of northern Ugandan nor the attitudes of its people…. ‘Kony 2012′, quite dubiously, avoids stepping into the ‘peace-justice’ question in northern Uganda precisely because it is a world of contesting and plural views, eloquently expressed by the northern Ugandans themselves. Some reports suggest that the majority of Acholi people continue to support the amnesty process whereby LRA combatants – including senior officials – return to the country in exchange for amnesty and entering a process of ‘traditional justice’. Many continue to support the Ugandan Amnesty law because of the reality that it is their own children who constitute the LRA.”

http://www.csmonitor.com/World/Africa/Africa-Monitor/2012/0308/Joseph-Kony-2012-It-s-fine-to-Stop-Kony-and-the-LRA.-But-Learn-to-Respect-Africans:  “The video shows only a Western audience, without any reference to African partners or leaders. They are disempowering and undermining the role of Africans… Whether they meant it to or not, whatever the intentions, it ends up looking like yet another Western campaign to help Africans who can’t help themselves. Africa can’t be handled that way anymore.”

http://thisisafrica.wordpress.com/2012/03/07/acholi-street-stop-kony2012-invisible-childrens-campaign-of-infamy/: “At the end of the day the Kony2012 campaign will not make Joseph Kony more famous but it will make Invisible Children famous. It will also make many, including P.Diddy, feel like they have contributed some good to his capture- assuming Kony is even alive. For many in the conflict prevention community including those who worry about the militarization of it in Central Africa this campaign is just another nightmare that will end soon. Hopefully.”

http://chrisblattman.com/2009/03/04/visible-children/: There’s also something inherently misleading, naive, maybe even dangerous, about the idea of rescuing children or saving of Africa… The savior attitude is pervasive in advocacy, and it inevitably shapes programming. Usually misconceived programming. The saving attitude pervades too many aid failures, not to mention military interventions. The list is long.

“One consequence, whether it’s IC or Save Darfur, is a lot of dangerously ill-prepared young people embarking on missions to save the children of this or that war zone. At best it’s hubris and egocentric. More often, though, it leads to bad programs, misallocated resources, or ill-conceived military adventures. There’s lots of room for intelligent advocacy.”

http://blogs.independent.co.uk/2012/03/07/stop-kony-yes-but-dont-stop-asking-questions/: “Invisible Children asked viewers to seek the engagement of American policymakers and celebrities, but – and this is a major red flag – it didn’t introduce them to the many Northern Ugandans already doing fantastic work both in their local communities and in the diaspora.”

http://africasacountry.com/2012/03/07/phony-2012-risible-children/#more-45997: “This is what democracy looks like according to Jason Russell: the power to choose on Twitter and Facebook who is to be the next target of America’s moral manhunt, all with the benediction of a panel of biddable celebrities.”

http://www.globalpost.com/dispatch/news/regions/africa/120307/kony-2012-campaign-criticized-dumbing-down-conflict: A summary of several other critiques of the Invisible Children campaign.