This profile of Vusi Mahlasela is the sixth entry in our new Artist Profile series, intended to introduce each contributing musician featured on the Wan Fambul/One Family benefit album. This compilation is available for a donation, with all proceeds going to the groundbreaking grassroots peacebuilding efforts of Fambul Tok in Sierra Leone.  Take a look at Tuesday’s post about Abjeez, and be sure to keep an eye out for our next post, Idan Raichel! 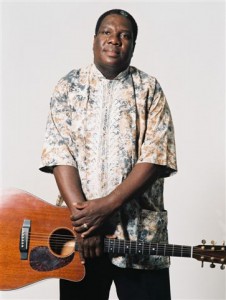 Vusi Mahlasela, simply known as ‘The Voice’ in his home-country of South Africa, is celebrated for his distinct, powerful voice and his poetic, optimistic lyrics. His songs of hope connect Apartheid-scarred South Africa with its promise for a better future. Raised in the Mamelodi Township, where he still resides, Vusi became a singer-songwriter and poet-activist at an early age teaching himself how to play guitar and later joining the Congress of South African Writers. After his popular debut on BMG Africa, When You Come Back,Vusi was asked to perform at Mandela’s inauguration in 1994 and continues to spread Mandela’s message as an official ambassador to Mandela’s HIV/AIDS initiative, 46664.

After world-wide touring and international acclaim, Americans first caught a glimpse of Vusi in the lauded documentary film Amandla! A Revolution in Four-Part Harmony, and the accompanying soundtrack. After the release of the film, long-time admirer and fellow South African, Dave Matthews, signed Vusi to his own ATO Records label and released The Voice (2003)¸ a collection of the best songs from Vusi’s catalog. In 2007, ATO released his latest album, Guiding Star, his first full-length release in the States. ATO Records will release the highly anticipated follow-up record to Guiding Star on January 18, 2011. The new album, Say Africa, produced by Taj Mahal and recorded at Dave Matthews’ studio in Charlottesville, VA, captures Vusi’s hope for the future of Africa: ‘Let all those who share in Mandela’s greatest wish—to one day see an Africa that is at peace with herself—SAYAFRICA.’

After recording the album in the States this spring, Vusi returned to his home in South Africa and was honored to help ring in the World Cup at FIFA’s Kick Off Concert at Orlando Stadium. The concert was broadcast internationally to an estimated one billion viewers. Following his performance, Vusi proudly introduced fellow South African, Archbishop Desmond Tutu on stage. Vusi’s anthemic song ‘When You Come Back’ was ITV’s official theme song for the World Cup in the UK. Other recent highlights include performing at Mandela Day to honor Mandela’s birthday, touring with Bela Fleck behind the release of his Grammy-winning album ‘Throw Down Your Heart,’ which features a live track from Vusi and Bela, two appearances at the TED conference and performing with Paul Simon.

In the midst of a busy international touring schedule, Vusi remains dedicated to his social activism and partnerships with non-profits, including his own Vusi Mahlasela Music Development Foundation, committed to the promotion of and preservation of African music. Other organizations that Vusi actively supports are OXFAM, The Acumen Fund, The African Leadership Academy and the ONE campaign.

Over a musically and socially consequential career, South African singer-songwriter and poet-activist Vusi Mahlasela has successfully followed his muse and continued to give back to his country. As he puts it, he knows that ‘musicians have to be like watchdogs, just by seeing and speaking out, directly to the youth as well, because we need some kind of Cultural Revolution to remove ignorance.”

When asked why the music from the struggle against apartheid still has so much appeal outside of South Africa, Vusi explains: “I think it was [because] our struggle had so much passion. We are all part of the same human family, and when you see your family suffering, your heart responds. Many people in the world found their hearts opening when they heard these songs.”

Another theme that permeates his music is the importance of forgiveness: “I learned from [Nelson] Mandela and [Desmond] Tutu that forgiveness is within you…If you don’t forgive, you are the one who suffers the most.”

To learn more about Vusi Mahlasela, visit his webpage.