This profile of Eccodek is the fourth entry in our new Artist Profile series, intended to introduce each contributing musician featured on the Wan Fambul/One Family benefit album. This compilation is available for a donation, with all proceeds going to the groundbreaking grassroots peacebuilding efforts of Fambul Tok in Sierra Leone.  Take a look at Tuesday’s profile of King Britt, and be sure to keep an eye out for our next post, Abjeez! 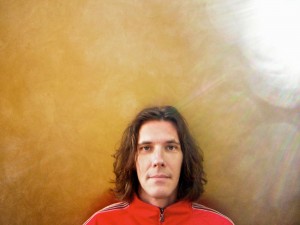 Eccodek is Canadian producer, remixer and multi-instrumentalist, Andrew McPherson. But more than that, it is the tapestry of sound created when a producer working with inspired singers and gifted multi-instrumentalists from the four corners of the globe find a common love for dub, funk, jazz and cinematic electronics. Eccodek is the sound of cultures mingling, borders dissolving.  It is the sound of the dub chamber, the goatskin drum and decaying vintage synths.  It is the sound of Mali, Turkey, Fiji, Nigeria, India, Canada and beyond.

Eccodek’s albums More Africa In Us (2003), Voices Have Eyes (2005), Shivaboom (2008) and their latest Remixtasy (2011) are built on a foundation of global beats, soaring melodies and textured electronica that has firmly established the project as a leader on the global fusion stage.

Eccodek uses his music “in a kind of subversive way, but not in anyway manipulative or with a secret agenda.  Music IS a universal language, so I try to send a message of cultural inclusion, tolerance, multiculturalism and open mindedness by collaborating, fusing cultural traditions and opening ourselves to new musical vocabularies.  By doing so, [the music] sends a message of peace, harmony and borderlessness. My music isn’t about preaching a belief system, other than the one that can be found in the landscape of my recordings and remixes.  I welcome any and all collaborative instincts, if they serve the song, and hopefully others will pick up on that good intention.  When they feel that, I’d like to believe that social change happens each and every time [Eccodek] records are played, without people even realizing they’re contributing to that dialogue.”

For Eccodek, “the power of song is a potent thing.”  He explains: “I always say to people that when the grid shuts down and the basic human resources become scarce in times of natural disaster, war or any upheaval, we turn to song to raise our spirits and give us guidance.  We saw this in Nazi Germany, when they attempted to wipe out the cultural traditions and voices of the people, that the people find a way to express themselves that can never be suppressed.”

By representing and celebrating so many unrelated cultural traditions in his music, he feels the message sent out is a very clear one of ‘we are one’. “There is no hierarchy of style in my recordings, but more a fearlessness to weave in whatever sound or musical tradition that feels right.”

To learn more about Eccodek, visit his webpage.