This profile of Bajah + the Dry Eye Crew is the first entry in our new Artist Profile series, intended to introduce each contributing musician featured on the Wan Fambul/One Family benefit album. This compilation is available for a donation, with all proceeds going to the groundbreaking grassroots peacebuilding efforts of Fambul Tok in Sierra Leone.  Coming up next, Bombino!

Wan Fambul/One Family features two songs by Bajah + the Dry Eye Crew – “Wi Na Wan Fambul” (which also features Angie and Jocelia) and “Gun Thing.”  In addition, Eccodek does a powerful remix of “Wi Na Wan Fambul,” available as a bonus feature when you share about the album with others. 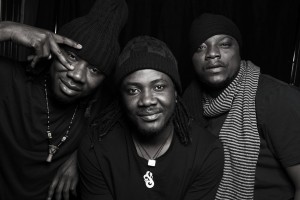 After packing the National Stadium for performances in their home country of Sierra Leone and contributing music to the Academy Award–nominated film Blood Diamond, African superstars Bajah + The Dry Eye Crew are poised to conquer the global airwaves with their upcoming international debut album and their unique sound, which blends the swagger and funk of hip-hop, the passion and energy of dancehall, and the socially conscious vibe of reggae. The group has generated so much buzz in the hip-hop world that major stars including ?uestlove and Black Thought of the Roots, Talib Kweli, K’Naan, Res, and El-P have contributed their vocal and/or production talents to the upcoming release, helmed by the production team Fyre Department (whose credits include 50 Cent, Snoop Dogg, GZA, Talib Kweli, Justin Timberlake). With this great collection of creatives, Bajah’s own star is rising as the Sean Paul of West Africa with the social conscience of Bob Marley and Fela Kuti.

So much more than just another hip-hop outfit, Bajah + The Dry Eye Crew have been likened to another band renowned internationally for speaking out against political and social injustices: U2. In Sierra Leone, now emerging from the throes of a brutal 10-year civil war, Bajah + The Dry Eye Crew are hailed as “the voice of the voiceless,” speaking truths on behalf of those people who have no political power, spreading messages of peace and reconciliation, outing corrupt politicians, and inspiring the disenfranchised youth to pursue their dreams. “We always speak about real stuff, like the suffering, what is going on,” says the group’s frontman, Bajah, “So most of the youth, the fans, are going crazy over it, because they think it’s the reality—that’s how it is. So they show mad love at times.”

Love is another theme of their music, and the joy and love their legions of fans have shown them comes through in their energetic, powerful live performances. The Crew—which consists of Bajah, A-Klazz, and Dovy Dovy in the U.S. and the Jungle Leaders (Funky Fred, Dell, and Sly) back in Sierra Leone—started writing, recording, and performing together in 2000, and quickly rose to the heights of fame in their home country, where everyone from young schoolchildren to village elders have come out to support Dry Eye’s music and message—often going to extremes to show these national heroes love and respect.

Bajah + The Dry Eye Crew see their music as a tool for helping to unify the divisions caused by the Civil War because it is a “way to tell stories, share history, unify people and help them focus on something positive.” Their goal is to “unify the masses, preach non-violence, and stand for change and development within Sierra Leone.”  They feel the most important issues Sierra Leone is currently dealing with are encouraging peaceful elections, building towards better infrastructure to develop their economy, education of the youth, health education and sanitation.  The songs “Ease di Tension,” “Salone,” and “Batta Dae Nak” (As The Beat Goes Down….) were written in anticipation of the upcoming national election to “encourage everyone to vote peacefully like one Family.”

The inaugural performance of Batta Dae Nak (titled on the album as “Wi Na Wan Fambul”) is featured in this behind-the-scenes look at the album, which also includeds Bajah’s inspiring reflections on the power of music to impel peace. 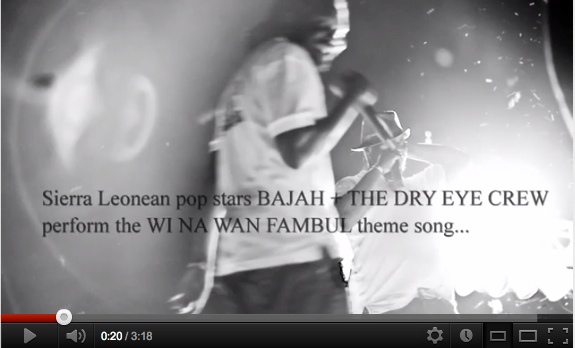 To learn more about Bajah + The Dry Eye Crew visit their webpage.