This profile of Saba Saba is the final entry in our new Artist Profile series, intended to introduce each contributing musician featured on the Wan Fambul/One Family benefit album. This compilation is available for a donation, with all proceeds going to the groundbreaking grassroots peacebuilding efforts of Fambul Tok in Sierra Leone.  You can catch up on all of our other great artists by visiting the Wan Fambul blog page. 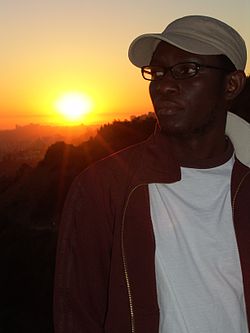 Saba Saba, Ugandan hip hop/Lugaflow artist & cultural activist, has been performing since 1994. Performing as Krazy Native, he was a founding member of the Bataka Squad, a Ugandan hip-hop group that originated the use of the Luganda language in hip hop music (Lugaflow). Saba Saba established himself as a solo artist with 2005 release of Tujja-Babya, a song on his album by the same name. Tujja-babya (meaning “to breakthrough” in Luganda) earned him a nomination for best hip-hop artist and song at the 2006 Pearl of Africa Music Awards. His music addresses daily struggles and triumphs of African life, while honoring his African culture through the use of his native language and musical references to traditional music and drumming. He co-founded the Ugandan Hip Hop Foundation and since 2003 has organized a yearly hip-hop summit in Kampala Uganda.

Saba Saba has been a guest artist and speaker at numerous events in Africa and the United States representing Uganda through his music and lectures on African culture and music. Highlights include his 2005 participation as a representative of Uganda at the UN’s first African Global Hip Hop Summit in Johannesburg, South Africa, his 2007 performance alongside Michael Franti and a crowd of 70,000 at the Power to the Peaceful festival in San Francisco and most recently in March 2008 he performed and served as a panelist for Harvard University’s Conference “African Youth Development through Art and Technology – The Role of African Hip Hop.”

Saba Saba sees corruption as the most important issue Uganda is facing and directly confronts the issue in his music.  He encourages people to “come visit Uganda and experience everything his homeland has to offer, including his homeland’s rich musical heritage, not to mentions its wonderful weather.”

His current music projects include a solo album titled “Cup of Coffee With Idi Amin” and a collaboration with the internationally recognized artist DJ Spooky.

To learn more about Saba Saba, visit his webpage.