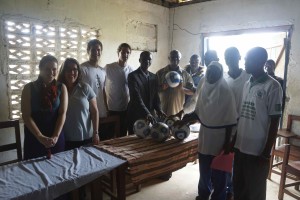 One of the most significant parts of my trip to Sierra Leone this December was the opportunity to visit with the student member of the Fambul Tok Peace Clubs. We visited schools in Pujehun, Bombali, and Kornadugu districts. The main goals of our visits were to learn about how the Peace Clubs are run, learn why the students were involved and how it affected their lives, and to get to know the students on a personal level to further a connection between the Sierra Leonean Peace Clubs and the US Wan Fambul program. Another aspect of our visit was the Futbols for Fambul Tok program. Through the work of Gabe Hoffman-Jonhson and his teammate Colin Skelly, both varsity soccer players at Darmouth College, each school we visited received a donation of footballs and each Peace Club received shirts for one football team (see the blog post Futbols for Fambul Tok for more information about this program). 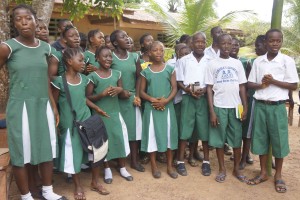 Our visits generally began with a school assembly or a meeting with the Peace Club, where we discussed the significance of Fambul Tok to the students and their communities. It was inspiring to hear so many young students express a desire to be Peace Ambassador; I could not help but imagine, what if US students were this interested in peace? What changes could be made if US students took ownership and asked for peace in their communities? Through talking with teachers, principles and students about Fambul Tok in these open forums, it was clear that the Fambul Tok Peace Clubs made lasting positive change in the schools and communities.

Following our discussions, Gabe presented the donations of footballs and shirts, which prompted fun, informal games with the students. This was an excellent opportunity for us to interact casually with the students and get to know them on a more personal level. 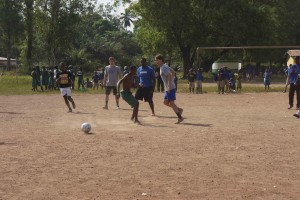 In Pujehun, we visited Ahmadiyya Muslim Junior Secondary School and St. Stephen’s Techological Vocational Secondary School. At Ahmadiyya, the Peace Club president is a young man who was forced into involvement with the war. He shared with us his personal story, telling us how important it was for him to return to school and how the Peace Club directly impacts his life and enables him to move forward in his education.  After the moving assembly, while Gabe and Colin played in a student football game, I talked with many young women about school and their lives. We had a great time and found commonality in dance and hair braiding. 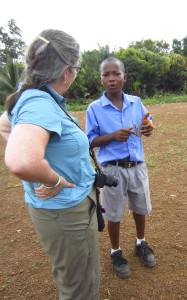 At St. Stephen’s we were welcomed with a song about Fambul Tok preformed by the students of the Peace Club. How thought out the lyrics were! It was such a joy to hear, through song, what Fambul Tok meant to them.

The Peace Club president at Panlap engaged Libby Hoffman in a great conversation about his ideas about leading in his community. He hoped to lead in bringing electricity to his village.

In Kornadugu, we visited Kabala Junior Secondary School. Here, we had a great meeting with the school principle, Albert Sheku Korio. After sharing with us about his experience during the war, he told us that he was in full sport of the Fambul Tok Peace Clubs. Mr. Korio believed that students were the answer to bringing peace to Sierra Leone and saw the Peace Club as an important tool for positive change. 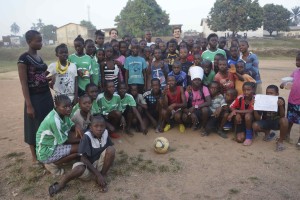 Without a doubt, the Fambul Tok Peace Clubs are creating community betterment and building strong student peace ambassadors. I am so lucky to have met with many of these young peacebuilders.