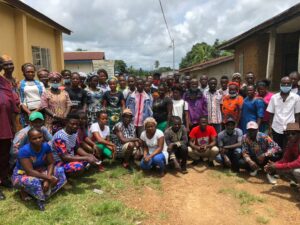 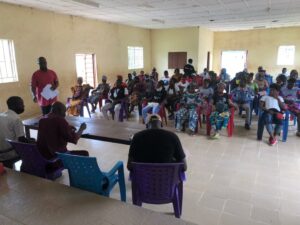 Youth participants (male and female) and chiefdom representatives gathered at Mokelleh town in Upper Banta, Moyamba, southern Sierra Leone Wednesday to dialogue and be au fete with challenging issues that have been earlier identified in the GRCs (Grievance Redress Committees) and chiefdom meetings over the past months.

Some members of the Chiefdom Development Committee (CDC) were present to throw light on the award of chiefdom scholarship for this academic year. Lansana Gbondo said: “the scholarship scheme is transparent without problems”.

The chiefdom youth leader John Ndoinjeh said: “ Youth are very happy for the fact that such meeting have never been held in this manner in which we are asked to make contributions towards our development”.

He requested the chiefdom administration to always involve young people in decision making processes as the Paramount Chief could not do things all by himself.

One of the youth Abu Bakarr Alusine mentioned that unemployment is still high adding that the new company Kasino did not comply with community agreement to employ indigenes over a year now.

One of the things that was revealed was that scholarship awarded by Sierra Rutile are sometimes controlled by workers of the company thus excluding indigenes.

Chiefdom Development Committee representative Lansana Gbondo explained the scholarship scheme and said this year’s scheme went to the right individuals as the Paramount Chief did sign the applications of targeted beneficiaries.