UN Peace building project which kicked off two years ago in four chiefdoms-(Lower Banta and Upper Banta- Moyamba) and Malen and Makpele-Pujehun has come to a close.

During a Multi Stakeholders Platform meeting in Bo,Tuesday,March 29,beneficiaries from the various chiefdoms were informed that the project has officially come to and end 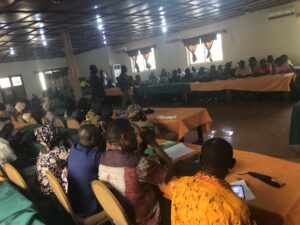 meeting in progress at J and E hotel

In her remarks,Minister of State,Office of Vice President,Francess Alghali extended gratitude to the United Nations Peace Building Fund for supporting the chiefdoms through UNDP /WFP activities.She said the project dealt with two aspects-supporting communities in peace building and promoting livelihood initiatives such as poultry and Inland valley swamps

She said the end of the project which was implemented by Fambul Tok International was not the end adding that as elections draw closer next year,there are potentials to engage communities on non violent activities

Paramount chief of Makpele,Saffa Tamu expressed gratitude to Fambul Tok for engaging communities for the past years adding that through the project peace is reigning in his chiefdom.He asked the United Nations to support communities especially towards development  processes

Member of Parliament,Constituency 104,in Pujehun,Shiaka Sama said challenges in Malen chiefdom which has to do with Paramount Chief Kebbie,himself and some community members has nothing to do with politics.He said he led the fight against wrong things the company,Socfin was doing adding that it has resulted in poverty and damages of community property.He said if they all come together in the interest of peace Malen will be one of the peaceful areas in Sierra Leone

Executive Director of Fambul Tok,John Caulker re-enforced his organization’s commitment to work with communities always expressing that the Vice President’s office play a great role in actualizing the project