Gunilla “Nilla” Hamme of Sweden, the director of the Peaceful Heart Network, met FTI Executive Director John Caulker last fall, when both were facilitators in a week-long training program in reconciliation sponsored by the Folke Bernadotte Academy. Hamme and her colleagues at Peaceful Heart work with women in in Rwanda, Congo and other countries on overcoming trauma, with a focus on using the technique called “trauma tapping.” Hamme expressed an interest in sharing the technique with Fambul Tok communities, and she and her colleague Robert Ntabwoba (of Rwanda) arrived in February to conduct training sessions for Fambul Tok peace mothers in Kailahun, Kono, Moyamba and Koinadugu districts. 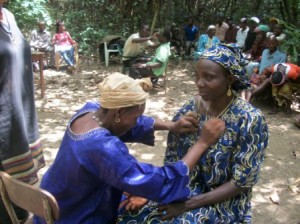 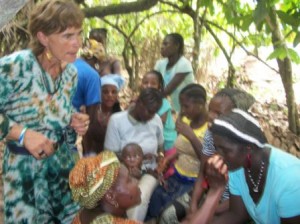 Speaking to peace mothers, Nilla said women that who witnessed traumatic events during the war are often still faced with many problems, including being unable to sleep, having frequent nightmares or lack of concentration. She described the trauma tapping treatment (TTT) as a simple physical technique to help address some of these challenges, and one that the women could learn and then share with others.

After her initial training, I facilitated other sessions in many Fambul Tok operational areas and over one thousand five hundred peace mothers benefitted and in turn will train their colleagues in other villages. Education in human rights issues especially women’s rights and children’s rights were also included as part of these additional trainings.