On on April 26, 2014, through a grant from the US Department of State, Fambul Tok International – Sierra Leone facilitated the donation of two brand new machines (a rice mill and cassava grater) as well as cash micro-grants to various Peace Mothers’ groups in Bombali and Koinadugu districts. 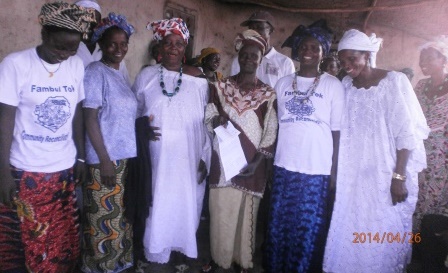 The rice mill was offered to Peace Mothers in Masabong section, Paki Masabong chiefdom, who requested the equipment to enable them to grow and sell more rice, and the cassava grater was donated to Masongbo section, Makari Gbanti chiefdom, Bombali district. 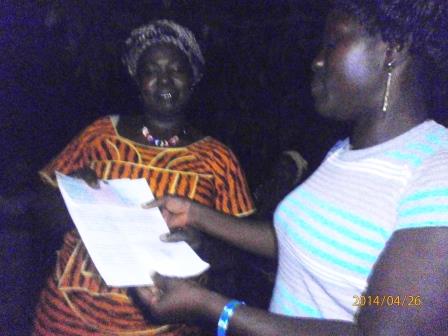 Handing over cheque in Heremakono

Receiving the rice mill on behalf of her section, Fambul Tok district executive chairperson, Sia Foryoh, was full of appreciation to the US Government. She also appreciated the efforts of Fambul Tok, for paving the paths for women empowerment Sierra Leone. She promised judicious utilization of the machines, adding that neighboring chiefdoms would also have access to the facilities.

Chairman Foryoh called other Peace Mother groups to work very hard, sharing that Masabong women started activity with their own little resources, and as of now they could boast having 17 million Leones in their coffers.

Masongbo, another beneficiary community that was offered the cassava grater machine,  saw their deputy chairlady assuring Fambul Tok that they would make good use of the machine. Madam Kadi Kanu highlighted constraints they were faced with; she disclosed that they had planted eight acres of cassava, but could not get assistance from any organization to support them. She shared that several organizations were approached, but none responded except Fambul Tok. She, too, was grateful to the US government. 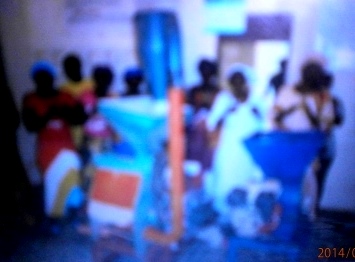 The funding from the US State Department provides for small grants to Peace Mothers groups, based on income generating activities the women themselves have identified and in most cases already begun.  The additional money or equipment will allow them to achieve the next level of growth in their work, and will promote collaboration among different communities of Peace Mothers.  The pass-through grants will also be going to other Peace Mother groups in Bombali, as well as a total of twelve groups in Koinadugu District.  Those micro-grants will be roughly three million leones each.

Other beneficiary districts will include Moyamba and Pujehun.