Fambul Tok International-Sierra Leone(FTI-SL) and Catalyst for Peace(CFP) have ended a  strategic planning meeting at the Taia Resort at Taiama in the Moyamba district for stakeholders.The purpose of the meeting was to update Ministries,Department and Agencies and stakeholders on progress of Fambul Tok’s work and the “Wan Fambul Framework”

In his remarks at the opening session,Executive Director of Fambul Tok International-Sierra Leone,John Caulker told his audience that an operationalized working relationship will be created and fund raising action plan developed during the retreat 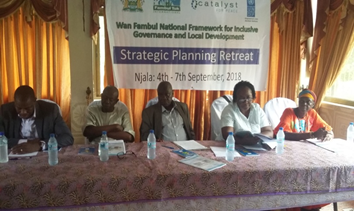 He said Fambul Tok and its partners,Catalyst for Peace have been working closely with the people of Sierra Leone on peace building and reconciliation after the country’s conflict.He added that during the outbreak of the ebola they also worked ensure the gains already achieved in communities are not depleted.He said after the end of the virulent ebola virus they designed the People’s Planning Process(PPP) for potential donors and organizations working in Sierra Leone to involve communities in the post ebola development priorities to avoid the post war mistakes when communities were not involved in development activities

Caulker disclosed that the pilot phase started in Kailahun and rolled over to Moyamba and Koinadugu districts.He added that the PPP has two layers-chiefdom people’s planning process and the Inclusive District Committees(IDC) that is responsible to bridge the gaps within communities with district structures.He acknowledged the support of CFP for the past decade

The Minister of Local Government and Rural Development,Anthony Brewah in his statement said the work of Fambul Tok and Catalyst for Peace is laudable and the Government of Sierra Leone appreciates it very much.

The two day session discussed the presentation on the draft national framework which was followed by questions and responses.The thrust is to harmonize it with emerging national policies and plans,clarify and operationalize ministerial roles and responsibilities in relation to the Secretariat.The Ministers discussed the semantics of Government and community led in the document and asked for modification and insertions. 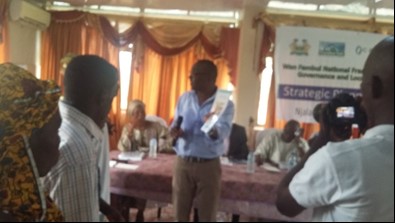 The people of Dasse chiefdom present their chiefdom plan

After presenting the metaphor on “cracks in cup”,Deputy Minister of Development and Economic Planning,Dr.Robert Chakanda asked whether it was possible to change the cup.The Minister of State,Vice President’s Office,Francess Alghali said “I see the cracks or cup as the whole country.We can mend Sierra Leone and not change it”.They looked at the omissions and gaps in the local government laws,local government service commission and called for review and better coordination to improve quality communication and avoid duplications

The retreat also discussed the roles and responsibilities of the various Ministries,Departments and Agencies engaged in local government and development.They identified challenges and promised to work together to resolve them.

The Director of Development did a presentation on the ongoing Poverty Reduction Strategy Paper IV.The discussions concluded that they must sit with the Local Government Ministry to clarify some details.They were also advised to look at past documents like the recommendations of the Truth and Reconciliation Commission.The Consultant of the Rural Development Policy dilated on his work.The group suggested to the Consultant to review the policy objectives to make them result oriented and to further consult other existing policy documents.

The retreat ended with the recognition of Libby Hoffman’s peace building work in Sierra Leone for the past decade.