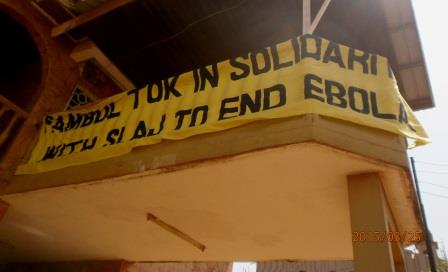 Banner on display to end ebola

On Friday, March 20, 2015, Fambul Tok headquarter office in Freetown welcomed the President of SLAJ, Kelvin Lewis and his entourage.  Fambul Tok’s Director of Training, Rev. Emmanuel Ballah Mansaray says that Fambul Tok continues to complement the efforts of the government and other partners in the fight against Ebola.  He highlighted a number of Fambul Tok’s interventions in support of communities to fight the disease including: launching a hand washing campaign and donating soap making machines to Kono and Pujehun districts (through financial support from US State Department).  He stresses that people should not be complacent and should take the necessary precautions as the virus is still around. 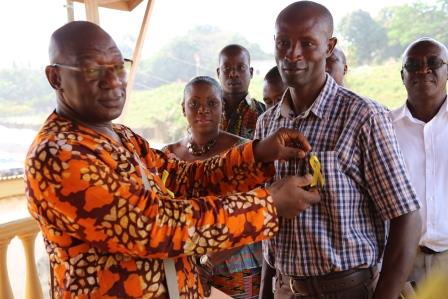 SLAJ President pins one of the staff

In his remarks Mr. Lewis expressed thanks and appreciation to Fambul Tok for its support to communities to fight the Ebola virus.

“If we want our kids to go back to school we need to come together to end Ebola,” he emphasized.  He called on institutions and groups to take action to end Ebola in Sierra Leone and across the region.

The Yellow Ribbon Campaign, according to Mr. Lewis, symbolizes the commitment of individuals, groups and institutions taking action to end Ebola in Sierra Leone and beyond.

He added that it represents a commitment to protect individuals, family members and the entire country by changing dangerous behaviors and adopting key activities.  The four key campaign messages in the Yellow Ribbon Campaign are: 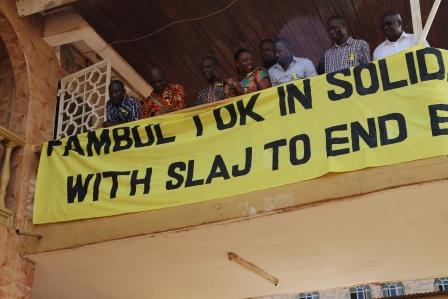 Fambul Tok continues to commit itself and work with other organizations to end the disease.  Staff were also pinned with the yellow ribbon and given wristbands.