School peace clubs in Kailahun,Pujehun,Moyamba and Koinadugu districts have joined in the commemoration of June16

The schools, based on their different activity plans organized various programs ranging from watching film of Sierra Leone’s  civil conflict to drama and outreach events 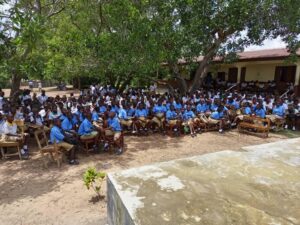 Fambul Tok supported schools with T shirts and other items. The clubs were set up in 2013 and the essence was to capture young pupils to promote peace and national cohesion

The Day of the African Child has been commemorated on June 16 every year since 1991, when it was first initiated by the OAU Organisation of African Unity. It honors those who participated in the Soweto Uprising in 1976 on that day. It also raises awareness of the continuing need for improvement of the education provided to African children.

In Soweto, South Africa, on June 16, 1976, about ten thousand black school children marched in a column more than half a mile long, protesting the poor quality of their education and demanding their right to be taught in their own language. Hundreds of young students were shot, the most famous of which being Hector Pieterson .More than a hundred people were killed in the protests of the following two weeks, and more than a thousand injured