Sahr and Nyuma were barely teenagers when the defunct Revolutionary United Front(RUF) rebels invaded their villages.  Once the closest of friends, Sahr, who lives in Kpekeledu village and Nyuma, also from Kpekedu in Kissi Teng chiefdom, Kailahun district had been brutally torn apart by decade long civil conflict in Sierra Leone. 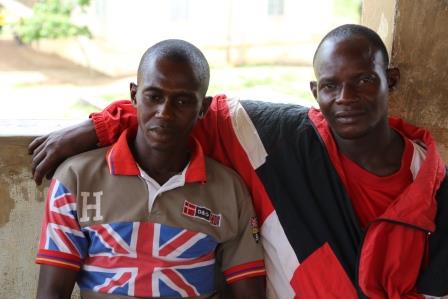 Sahr and his father fled into the bush only to be captured by the rebels.  The rebels ordered Sahr to kill his father.  His repeated refusal angered the fierce looking men.  His childhood friend, Nyuma, who was also captured, was given orders to kill the old man. Having no other choice, Nyuma slit the throat of best friend’s father.

As that was not enough, the rebels then ordered Nyuma to beat up Sahr.  Nyuma beat Sahr so severely that even today Sarhr’s body remains disfigured.  He walks with great difficulty, supported by a walking stick.

The former friends lived in fear and did not speak about their events until 2008, during a Fambul Tok bonfire. Sahr forcefully scrambled through a jam-packed audience, came forward and testified what Nyuma did to him during the conflict.

Nyuma, without countering the allegations, acknowledged what he had done but admitted that he did it under duress and not of his own volition.  Nyuma apologized and asked for forgiveness.  Sahr shed tears but was strong enough to accept Nyuma’s apology, adding that he did from the bottom of his heart.

Since their reunion eight years ago, both Sahr and Nyuma continue to live in peace to the amazement of community members.  As a commitment to the peace, Nyuma is always very helpful to Sahr, helping Sahr do physical hard work that he can no longer do on his own.  Nyuma has even helped Sahr build a house in Kpekeledu.  Kpekedu and Kpekeledu community members have embraced Sahr and Nyuma for their stance to ensure that peace and unity prevails among them.

“We work together as a team.  We are doing this to show the world that it is possible to forgive someone that had wronged you,” Sahr emphasized.  He continued, “We have even planned to do in-valley swamp cultivation this year because we wanted to do groundnut but we don’t have the opportunity.”

According to Nyuma, “Since Sahr accepted my apology we continue to live in peace and even our community members admire the way we interact and work together.”

“I visit Sahr whenever he has work to do.  We are not even friends now but brothers as we work and dine together,” he revealed

Sahr is so grateful to Fambul Tok for assisting him with roofing sheets to build his house.

As part of their contribution to post ebola recovery, Sahr and Nyuma participated in a one day community preparedness meeting organized by Fambul Tok in Bumassadu section, Kissi Teng chiefdom.