Fambul Tok staff in Kono district has started refresher training sessions for Grievance Redress Committees members starting with 4 sections-(Bayafeh, Bafinfeh, Bayakor and Moindekor) Gbense chiefdom. Old GRC members    were trained alongside new members that replaced those that have migrated to other places. A total of 80 participants were drawn from the four sections and sessions were held in different sectional headquarter towns

It started in Bayakor section, with debriefing by old GRC members. According to Sia  Sam, Secretary for the GRCs, said  they have mediated several cases including  land dispute between Koakor and Faada villages which was settled amicably. 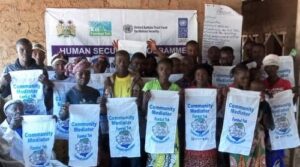 Lilian Morsay, Fambul Tok staff gave detailed background of Fambul Tok   values, dos and don’ts. The session also dealt with conflicts, steps in mediation, cases GRCs should mediate and communication. She said before the end of the month, GRCs would have been retrained in all sections in the chiefdom

Chairlady of the section, Amie Fonjah commended Fambul Tok for the timely refresher training as this has equipped them to help other communities and work harder for the development of their section and the chiefdom.