Local town chiefs of a twin village, Igaia of Wara Wara and Diang chiefdoms in Koinadugu district have reconciled during traditional “burn fire”.

Chief Fayandie Daboh of Igaia,Wara Wara Yagala was not on speaking term with Chief Mohamed Koroma of the other side of the same village but which falls under Diang chiefdom. 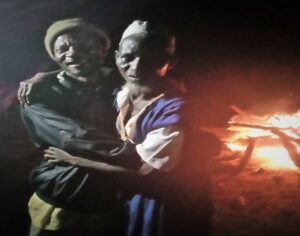 chiefs hugged themselves during reconciliation

During burn fire ceremony recently, Chief Koroma was the first to boldly come in front of the gathering  and confessed that there had being an existing issue between himself and his counterpart Chief Fayandie Dabor . He narrated that they had not been having dealings with each other for over three years and that had consequently affected peace, unity and development of the community. He requested for the matter to be resolved with the assistance of Fambul Tok Community Welfare and Mediation Committee members(CWMCs)

After his testimony, the CWMCs called on Chief Fayadie Daboh to make a statement regarding what transpired between them. He decided to let sleeping dogs lie and called for peace to reign

With help of the religious leaders and other community elders, the two chiefs openly hugged and danced together around the fire as the audience went into jubilation.

On the occasion of the celebration of the International Day of Peace, 21st September 2022 with the theme: “End Tribalism. Build Peace and National Cohesion”, we at Fambul Tok International- Sierra Leone want to use this moment to re-echo and fully share in the message of strengthening the ideals... Read More >