The framework is an inclusive governance model aimed at putting the people at the centre of development and socio-economic transformation by ensuring improved service delivery, sustained poverty reduction and strengthening peace and cohesion.

It also includes elements of reconciliation and peace building in the development planning processes led by the people and local communities.

Welcoming participants, the Paramount Chief, Sanda Taindaren Chiefdom,Alhaji  Abdulraman Tejan  Bangura I said he is very happy that his chiefdom, out of the 13 chiefdoms in Karene will benefit from Government, through Fambul Tok for the implementation of the People’s Planning Process model. He said they have waited for too long for such initiative, noting that it would be the right way to bring development to Sanda Taindaren assuring that he would provide all the necessary support in order for the initiative to succeed. He lamented over situations in his chiefdom, adding that the chiefdom is one of the most deprived one in the country. He called on his people to work closely with Fambul Tok during the implementation period as they stand to gain from several things including various training opportunities. 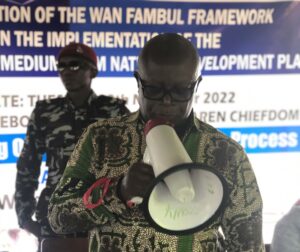 Chairman of Karene District Council was charged with the responsibility to chair the launching was very happy to see his district recognized in such a large gathering. John Ditto Kamara said Karene is new but had gain some important projects for the past two years

He gave a brief background of the new district adding that few chiefdoms were drawn from Port Loko and Bombali districts and today it is the fastest growing district. He lauded the efforts of Government of Sierra Leone and Fambul Tok International for launching the People’s Planning Process model in his district. He called on Government to extend the PPP to the remaining 12 chiefdoms in Karene. Chairman Kamara extended gratitude to the Minister of Local Government and Community Affairs his steadfastness to promote councils as he was the first man to ensure that chairmen, mayors and deputies were on pay roll

In his   statement, John Caulker, Executive Director of Fambul Tok International-Sierra Leone said the initiative was a laudable one developed by government to bring the people closer to the development of the country. He said it was important for people to begin discussing their own issues within their respective communities and districts.

John Caulker said the framework which would be anchored in the district councils would be a platform for the people, local authorities and Councils to come together and discuss their issues and development priorities for the improvement of their localities, adding that the PPP was a one-stop-shop that would help to bring people at the centre of development in the country.

He said the decision to come to Sanda Taindaren chiefdom was taken by the Steering Commitment adding that partnership with the people starts immediately after the launch of the pilot phase. He explained selection process of the  ten sections adding that Fambul Tok staff will work based on the sequence from one to ten. The Executive Director mentioned the establishment of the Village Development Committees in every village during the implementation phase

Dr. Sheka Bangura of the Ministry of Planning and Economic Development in his statement said in order for government to back its commitment with action, they have provided financial support in the national budget for fiscal year 2022 to implement the integration of the Wan Fambul Framework in the implementation of the Sierra Leone’s Medium-Term National Development Plan (MTNDP) pilot project in selected chiefdoms. 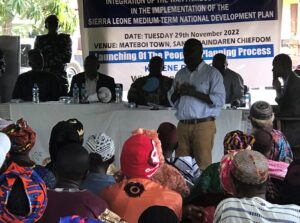 He said Government wants to expand the PPP Model to all 1,343 sections in the country as it is one of the best which brings people together for development aspirations. He appealed to the people to grab such opportunity.

District Officer, Karene, Alex Kargbo said with such project, the people stand to benefit a lot

He noted Government has relentlessly worked with development partners, especially Fambul Tok   to develop the initiative and ensure the people are at the centre of development in Sierra Leone.

Launching the PPP Model in Mateboi town, Minister Tamba Lamina said when you come closer to communities you will always know what is going on. He said his Ministry ensures that people sit and make decisions on their own than dictating to them what should happen. He mentioned review of Decentralization Policy adding that one of the key things in the policy has to do with decision making. He said the ‘wan fambul’ framework is closer to the hearts of the people

The WFF has been piloted in four districts namely: Kailahun, Moyamba, Kono, Koinadugu and now Karene. Government has decided to adopt and roll out the framework in the 190 chiefdoms and 16 districts of Sierra Leone.

Training sessions for members of the Community Welfare and Mediation Committee (CWMC)members and Peace mothers’ animators have started in Kalangba section,Sanda Taindaren chiefdom,Karene district.It was held in Mathoir village where participants were drawn  from fifteen villages. In his address,Acting section chief Amadu Kargbo said it was a dream come... Read More >

Former rebel fighter in Sierra Leone’s civil war Bockarie Marah has asked his people of Sengbeh chiefdom,Koinadugu district to forgive him in the interest of peace and national cohesion.He was testifying during burn fire ceremony in Gbenikoro village very recently. He said he was absent during traditional reconciliation ceremonies... Read More >