Had it not been for the timely intervention of Fambul Tok staff, the entire Peace Mothers group in Saba two section, Sowa chiefdom, Pujehun district, would have dissolved. This was due to accusations by group members that their chairlady, Madam Amie Kijan had misused their funds and left the village unceremoniously. They stated that unless Kijan reported to them officially, they would no longer be interested in the group. Kijan was relieved of her position immediately. 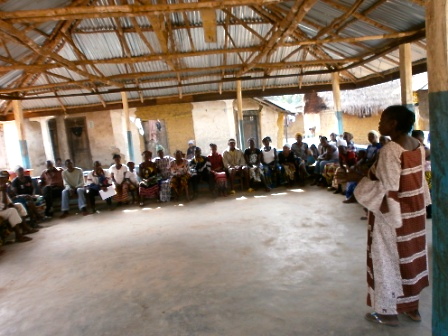 The restored chairlady addressing the crowd

Nearly two weeks after leaving Fayama village, Madam Kijan failed to turn up for the proposed date for Peace Mothers to open their account, which made them impatient. Members were in disarray and they even failed to meet for their usual monthly meeting. The situation deteriorated to the point where they wanted to dissolve the group. Fortunately, Fambul Tok had scheduled sectional dialogues on the gender laws and child rights act for all community members including Peace Mothers. Prior to the dialogue, staff were briefed on the situation in the section, relating to Madam Kijan.

A meeting was called and Kijan was given the opportunity to explain her absence, especially the accusations that were levied on her. She told her audience that she had family problems as her relative was murdered in cold blood in Bonthe district. At that point everyone was shocked and expressed condolences to the bereaved family members. On the alleged misuse of funds, Kijan stated that she was sorry that she did not inform the general membership. She clarified that she did not misuse the funds. She showed deposit slips and other documents from council, adding that the signatories could testify that she used her own money, as the funds were not enough to do all the banking procedures.

After showing all documentary evidence, the Peace Mothers were satisfied with her explanation and one of them said Kijan should have told them so that every member would not have pointed an accusing finger on her. Fambul Tok staff also called the entire membership to forgive Kijan in the spirit of reconciliation and restore her to her former position. Amidst singing and dancing, Kijan was reinstated!