As a way to empower rural women in the country in accordance with this year’s theme “Empower rural women-end hunger and poverty”, Fambul Tok International-Sierra Leone, with funds from Catalyst for Peace, and Tides Foundation in the United States has supported Peace Mothers in Koinadugu, Kono and Moyamba districts to start fish farming in their various communities. 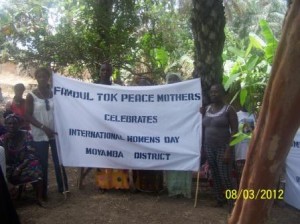 In her keynote address, Mrs. Eberonke Jones explained the International Women’s Day is a day which creates a space for women to reflect on their achievements, be it social, economic or politically. She stressed that women are very important and play vital roles towards the development activities of any country.

She went on to state that to make this year’s theme a success, Fambul Tok decided to support women to start fish farming in Kono, Moyamba and Koinadugu districts. Mrs. Jones explained, however, that the fish farming network will be extended to other sections, and urged Peace Mothers to make good use of the money, adding that it is a revolving scheme that will benefit other communities as the fish business grows.

Speaking on the purpose of the celebration in Koinadugu, Fambul Tok Koinadugu district staff member Zainab Kamara said that Fambul Tok decided to bring women from all of its operational communities so that they can interact, share ideas and celebrate their achievements in various realms of life. She said that Fambul Tok continues to support Peace Mothers in their various sections, adding that almost all Peace Mothers groups in Koinadugu and other areas have harvested their crops already.

Explaining the concept of the fish farming network, Fambul Tok Moyamba district staffperson Isatu Masu Sesay stated that the idea was conceived during the Fambul Tok Peace Mothers’ cross-district visit to Shenge, Kargboro, Moyamba district. She went on to call on beneficiaries to be honest in their new trade. After receiving the funding on behalf of these beneficiary communities, Margaret Mansaray of Heremakono section,Wara Wara Yagala chiefdom, Koinadugu district praised Fambul Tok’s support of  their agricultural activities, exclaiming “We were not expecting such agenerous amount and on behalf of beneficiary communities, I thank Fambul Tok.” 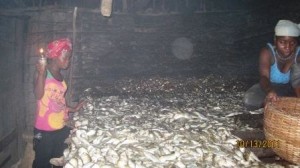 Madam Adama Kalokoh, Chairlady of Peace Mothers in Bombali district said Peace Mothers in Masongbo section in Makari Gbanti chiefdom have successfully planted eight acres of cassava on their own without external support. She called on other peace mothers in Bombali district to embark on any activity by stressing that “If you want organizations to assist you, you have to start.”