The Principal of the Government Junior Secondary School in Dea, Kissi Kama chiefdom, Kailahun district, recently affirmed that there is measurable improvement in attitude and behaviour of his pupils since Fambul Tok introduced peace clubs in that community.

Members of the school clubs now spreading peace in their communities

According to Principal Tamba Jabba, persistent troublemaking among students continues to reduce drastically as the peace club members engage their folks on issues dealing with peace and reconciliation. 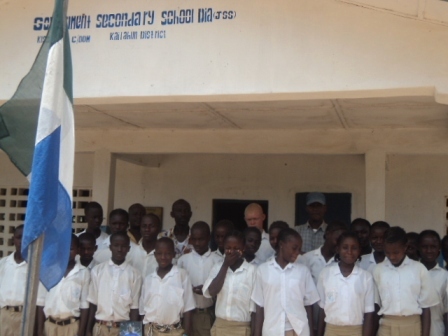 He said the club has developed a new strategy called ‘demi chero’, a Kissi word, meaning “let’s discuss issues at family level”, adding that it has helped especially teachers who were faced with a lot of complaints and other issues in the school environment. He went on to state that violence among pupils has minimized, boasting that the community is now peaceful.

The Principal emphasised that the overarching aims of  ‘demi chero’ is for young children to learn from Fambul Tok and from the recent past of the country and actively participate in building sustainable peace in their communities.

According to the President of the of the school club, Sahr Yonkendeh, truancy which has been the major concern of teachers is something of the past now as they have sensitized their folks on the importance of staying in school. He said they meet every Tuesday to discuss pertinent issues on conflict resolution.

The vice President, Finda Lamin also called on pupils to transform and help others to be useful citizens to contribute to the development of Sierra Leone.

Meanwhile as part of commemorating the Day of the African Child, June 16, 2013, the Fambul Tok peace club of the Ahmadiyya Muslim Secondary School in Pendembu, Upper Bambara chiefdom, Kailahun district, organised a quiz and debate competition in the school. The debate was based on the effect of the rebel war on Sierra Leone. The question and answer session also touched on the war.

As well, the club has successfully settled a dispute between two members, Massa Konneh and Mamie Bockarie. These two girls often incited their colleagues to cause problems in school. In the end, both of them embraced each other and also advised their peers to remain peaceful.