The Minister of Local Government and Rural Development,Maya Moiwo Kaikai has launched the first phase of the “Wan Fambul”-the national framework for inclusive governance and local development.The launching took place at the Radisson Blu conference hall,Aberdeen in Freetown on Tuesday,November 14,2017. 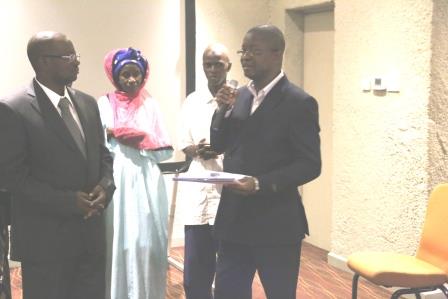 Handing over Delmandugu Chiefdom development plan to the Minister

Fambul Tok International-Sierra Leone and its partner,Catalyst for Peace,a US foundation that is working with Fambul Tok since its inception a decade ago last year partnered with the Ministry of Local Government and Rural Development to open the way for a national peoples planning process.

Speaking at the occassion,Mr.Kaikai said he was impressed and moved when he was invited by Fambul Tok to the Taiama meeting  last November which was aimed at improving inclusive governance especially in local commnities.

He went on to state that having heard from community members their roles and responsibilities in governance,he had no alternative but to take the idea to the Government which had cabinet endorsement few months ago.

A cross section of participants

“My Government attaches tremendous importance to the issue of inclusion and decentralized governance to take developmet to the doorsteps of local communities”He stressed.

He emphasised that his Ministry has intensified its engagement with Fambul Tok and Catalyst for Peace to exlore possibilities of upscaling the initiative and eventually ensuring that all Local Councils benefit from it,and more importantly,the Government takes ownership of the process.

According to the Executive Director of Fambul Tok,John Caulker,the framework will effectively be supported by Government,national and international  civil society organizations and donors.

He said for the past year,the Ministry has formed a new partnership with Fambul Tok and Catalyst for Peace with the goal to develop the “wan fambul” national framework for inclusive governance,adding that the initiative outlines a holistic commnity owned and led process leading to a national peole’s plan which is built on the learning from a 3o months comprehensive pilot process in Kailahun,Moyamba and Koinadugu districts 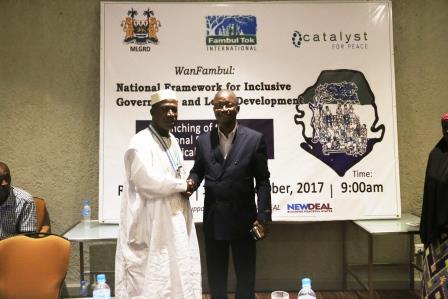 Chairman of the occasion who is also Director of Decentralization,Alhassan Joseph Kanu said for the effectiveness of the process,they have constituted steering and teachincal committees to facilitate the initiative.He said the launch of the phase one of the inclusive governance and the unveiling of the steering and technical committees demonstrates the seriousness government attaches to the process.