The Grievance Redress Committee (GRC) joint meeting include members from Upper Banta and Lower Banta chiefdoms and members of the Farmer Based Organizations has ended at the CDC (Chiefdom Development Committee) hall in Mosenesie, Moyamba district on Friday March 25, 2022

This meeting is a UN Peace Building Fund exit strategy to inform members of the end of the project in both chiefdoms. 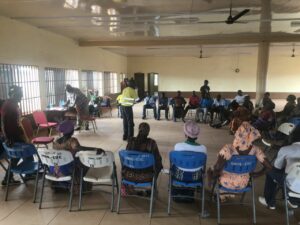 Executive Director Fambul Tok, John Caulker, said there is need to know about activities, successes and challenges in the past two years and how problems could be solved using chiefdom administrations and mining companies in the chiefdoms. He said the exit strategy meeting does not mean Fambul Tok is going out of the chiefdoms but stressed that it was the end of the Peace Building Fund project in the chiefdoms

Sierra Rutile company representative, Mr. Alfred Tucker, said the company has been keeping up with its corporate social responsibilities

He said the company provides 0.1 percent of its revenue to CDC for development purposes, adding that it increases every year

He said 145 scholarships have been provided by the company for 2022 and very recently surface rent allocation has been made.

GRC chairman Mohamed Barrie said the project helped the company’s business environment as there were no road blocks for the past two years. He appealed to UN to extend the project especially as we approach elections next year. Adding that Lower Banta is still struggling with paramount chieftaincy problem due to a leadership vacuum

GRC chairman for Upper Banta, Alfred Laggah said the Peace Building project united youth and created a lot of awareness to move away from violent situations

The meeting ended on a positive note setting up a small committee that will meet with the Community Affairs Department of Sierra Rutile on sustaining their work.