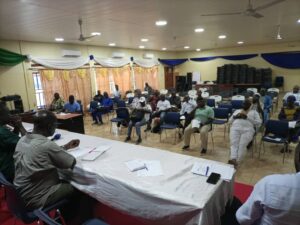 MDC Chairman Joseph Benedict Mbogba welcomed all. He said the DDCC is a transformation of the IDC/MSP (Multi-Stakeholders Platform). It will be performing the same functions that the MSP and IDC used to do. “The DDCC will continue with the same goal, function and focus and Fambul Tok will still continue to provide vital support”, explained Mr Mbogba. This meeting should be taken seriously as it will discuss issues affecting the welfare and development of Moyamba district, he said.

Fambul Tok Abdul Rashid commended the roles of OVP, MODEP, MLGRD, UNDP (United Nations Development Fund), MDC and members of the IDC/MSP in the peace and development of the district.” FT is happy 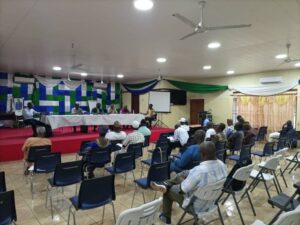 to witness this transformation in line with the Wan Fambul National Framework and,  will continue to support the process now that GoSL and councils are taking ownership of the process”, he said.

MODEP Sheku Gibril said the Ministry will be around to monitor progress to ensure that DDCC meetings are well structured in deliberations, reporting and actions. He said a committee must be set up to follow up on action points and meeting calendars.

The DDCC identified education as a major challenge as schools were not doing well in public exams. The cited causes ranging from lack of trained and qualified teachers, lack of parental control, GBV dysfunctional supervision by relevant education stakeholders and misuse of school subsidies by heads of schools. A number of action points were suggested to ameliorate the situation including restriction of ”luma” (trade fare) days and improvement of school facilities. Paramount Chiefs will hold meetings with education and community stakeholders. 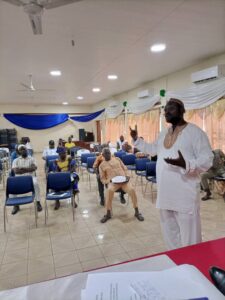 PC Foday Momoh Gulama asked for Teaching Service Commission to provide incentives to attract teachers, and called for the road network to Shenge and Songo to be improved.

CSO Gerald Foday called on MODEP to ensure the Moyamba benefits from development projects and the President’s 100 schools project.

UNICEF field officer said they are interested in the DDCC because without peace in communities their interventions will not succeed.

Fakuya PC Bengeh asked the DDCC to pay attention to his chiefdom as there is a minority who are dissatisfied with the outcome of the chieftaincy elections and are bent fomenting trouble.