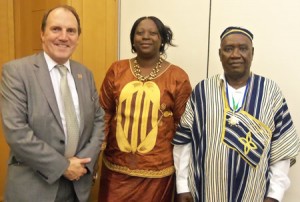 The month of October saw a rush of activity in London! Following the Fambul Tok film’s successful European premiere at the Raindance Film Festival on 29 September, UK-based volunteers working with Fambul Tok International organized a number of events in the city. They were fortunate to have Paramount Chief Alfred Banya, the Chair of Fambul Tok’s Moyamba District Executive Committee and Michaela Ashwood, National Coordinator of our Peace Mothers Groups, join them for these events.

On 12 October, the All Party Parliamentary Group on Conflict Issues, Fambul Tok International and The Forgiveness Project co-hosted a meeting in the UK Parliament. Chaired by Simon Hughes MP, deputy leader of the Liberal Democrats and Chair of the All Party Group, the meeting was attended by approximately 80 people, from activists and policy-makers to students from two of the six London schools currently participating in pilot educational activities that draw on the experience of Fambul Tok. Both Chief Banya and Michaela made presentations and answered questions posed by an enthusiastic audience. Both emphasised the importance of community-wide involvement in all aspects of Fambul Tok reconciliation processes.

13 and 14 October were spent visiting Notre Dame Roman Catholic School for Girls and Little Ilford Secondary School, respectively, two of five London schools at which Fambul Tok educational activities are currently being piloted. At Notre Dame, a group of 14 and 15 year-old students of Sierra Leonean heritage discussed their reaction to the Parliamentary meeting, which they had attended the evening before, and shared with Chief Banya and Michaela the impact which working with and through Fambul Tok has had on them. Working under the guidance one of their teachers, the students hope over the coming months to develop curriculum materials for classroom use based on the experience of Fambul Tok and plan to screen the film to a whole-school audience by the end of this year.

The next day’s visit to Little Ilford involved witnessing performances put on by groups of 13 and 14 year-old students who had closely examined the gestures, movements and key words used in Fambul Tok bonfire ceremonies and by Sahr and Nyumah, two young men whose friendship was ripped apart during the conflict but which has since successfully been repaired, as shown in the film. Board Member Jon Lunn, Chief Banya and Michaela were moved and inspired by the students’ responses to the work of Fambul Tok – above all, how they had managed to enter into the physical and emotional worlds of Sierra Leoneans involved in it, while at the same time developing their own distinctive interpretations of what they had studied.  The wonderful teachers at Little Ilford who are working with the students intend to continue utilizing the experience of Fambul Tok as part of the curriculum, and hope also to explore its potential to assist in community-building across the school as a whole.

Last but not least, there was another screening of the film on 27 October at the London School of Economics, in an event sponsored by the Centre for the Study of Human Rights. The venue was packed with an audience of 150 people, with some being turned away because there was no more room. Following the screening, Jon Lunn and Chief Banya hosted a lively Q&A session. There was much debate about how far the experience of Fambul Tok might be transferrable into other cultural and political contexts, and whether it should be understood as part of the spectrum of ‘transitional justice’.

I would like to place on record sincere thanks to the volunteers without which these events would not have been possible – in particular, Modupe Oshikoya, Daniel Rogers, Tim Spafford and Nancy Quilliam. Gratitude also goes to Chief Banya and Micheala for being such wonderful ambassadors for Fambul Tok during their visit.

So, what comes next for us in the UK? Hopefully, more film screenings. The pilots in London schools, already underway to such inspiring effect, will continue. Perhaps the time may also have come to explore whether some in the Sierra Leonean community in London and beyond might want to begin moves to establish a ‘friends of Fambul Tok in the UK‘ network. However, in keeping with the values and principles of Fambul Tok, the time will only be right if there are Sierra Leoneans who are happy and willing to take ownership of such an initiative and lead the way. The immediate next step, then (just as it always is in Sierra Leone itself) is consultations!