The Minister of Local Government and Rural Development,Tamba Lamina  as a way of recommendation,pointed out clearly that the only organization that will continue to promote peace and cohesion in Lower Banta chiefdom will be Fambul Tok International Sierra Leone 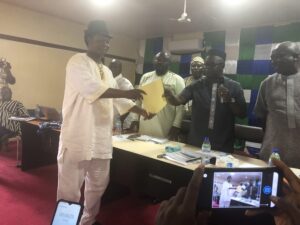 He was addressing a large audience including hundreds of community members of Lower Banta chiefdom who arrived in Moyamba town for the return of their Paramount chief.

According to Minister,PC Gibao Russell has being out of the chiefdom for nearly four years,as he was accused of mismanagement and  other offences brought against him by some members in the chiefdom.Based on allegations,a committee was set up by government to investigate stewardship of the chief.After nearly four years in exile,the minister revealed that the meeting in Moyamba was to hand over reports including recommendations  to the chief on his return to take up duties once more

Minister Lamina in a very strong voice admonished PC Russell to work with his subjects to develop Lower Banta.He lauded efforts of Fambul Tok adding that as the organization has worked in the chiefdom for few years,government has recommended the organization to implement the People’s Planning Process(PPP) in the chiefdom.The PPP encourages communities to be involved in every sphere of development from  project initiation,planning,implementation to closure.It calls on organizations working in communities to include communities in whatever they are implementing

“Am calling on you Chief Russell to work with Fambul Tok and community members  to ensure there is peace and cohesion in every part of your chiefdom” Minister pointed out.

In one of the recommendations,Minister urged chief Russell to return to Moyamba District Council activities of the jetty in Gbangbatoke,headquarter town of Lower Banta chiefdom