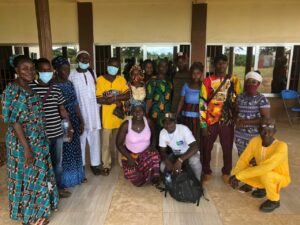 This meeting was very successful as Farmer Based Organizations in the WFP livelihood project also formed part of the meeting.

The gathering started with updates from all nine sections.

Office of National Security boss in Lower Banta, Eric Dumbuya, said the chiefdom enjoys a peaceful atmosphere. He said one of the challenges has to do with the suspension of the chiefdom youth leader by the district youth leadership.

He said the Peace Building project has been so successful that there has been no road blocks mounted over the past one year.  He said, “The creation of GRCs was a big blessing to the people of Lower Banta”.

Councilor Solomon Lavalie was grateful to the Office of Vice President, Fambul Tok and both UNDP and WFP and called for the extension of the project duration.

Women’s leader Baby Keifala called on her colleagues in GRC and chiefdom leadership to continue their good interventions to restore peace and unity in all sections.

Project Officer Solomon Yarjoh on behalf of Fambul Tok and partners said he was happy to have the last meeting for 2021 with farmers, so that both GRCs and farmers, share knowledge and find possible solutions to challenges in their communities.

The meeting ended on strong hope of sustainability even after the close of the PBF project.