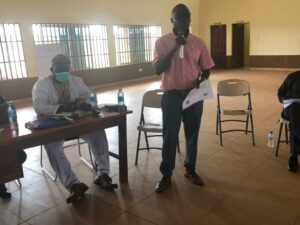 The people of Lower Banta chiefdom in the southern district of Moyamba in Sierra Leone have asked the Government through Fambul Tok to convene a special meeting to once and for all resolve the chieftaincy crisis in the chiefdom.

This was one of the recommendations during the 4th Multi Stakeholders Platform town hall meeting held at Mosenesie on Friday, August 13, 2021.

According to senior section chief, Alpha George, Lower Banta has no central command presently adding that the care taker chief has abandoned her duties and left the chiefdom. He said chief Aminata Rashid played her role well but was forced by certain functionaries to compromise her duties, which, she refused and left. 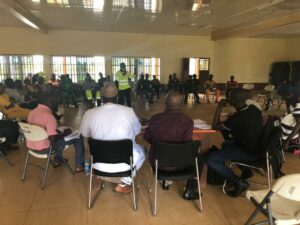 Civil Society representative in the chiefdom development committee, Sylvester Bob Carter joined many speakers to point out that unless and until government puts the chieftaincy crisis as one of the priorities, the chiefdom will remain ungovernable.

PC Fatima Sundifu Sovula who chaired the meeting said everyone has the moral role to ensure that Lower Banta returns to its glory. He called on chiefs and youth to remain peaceful and added that government would definitely take action very soon.

Chief Sovula said the UN PBF project for the past year has ensured peace, as no road blocks have been done

Executive Director Fambul Tok International John Caulker called on the people to be peaceful, as things will be put in place to ensure Lower Banta comes back to its old days.

He said the project takes happenings in sections and chiefdoms to district and national level through the Multi-Stakeholders Platform (MSP) so authorities would take actions. 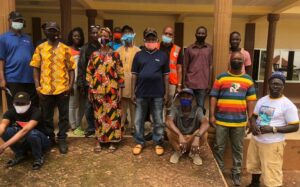 Many issues in both Lower Banta and Upper Banta chiefdoms were highlighted and collated during Grievance Redress Committee (GRC) and chiefdom deliberations over the past months.

Company representative of Vimetco, Joseph Amadu responded to many accusations including unemployment and scholarship offered every year.

The MSP has representation from all stakeholders in Moyamba and meets every quarter to deliberate on issues and find possible solutions to ensure peace and development aspirations.