Through their usual monthly contributions and micro credit scheme, Peace Mothers in Tongea section, Kongbora chiefdom in Moyamba district have unanimously agreed to raise huge amount of money to embark on large scale cassava production. This decision was reached during a recent meeting in Tongea 2 village

According to the Treasurer of the Peace Mothers’ group, Madam Adama Banya , the proposed goal is to start a very  big  project aimed at producing large quantity of gari, fufu and other food stuffs to be sold to the public 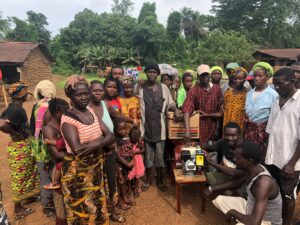 “Presently we have collected sum amount   by selling over 24 bags of Fufu, and we are now targeting large scale production,” says Madam Banya. She went on to state that the women in all the villages in the section meet  every month, adding that during the monthly meetings each member contributes Le5,000 and after collection the money is given out as loan to be repaid against the next meeting.

Posing with their brand new machine

In 2021, the women embarked on acreages of Cassava farm and vegetable gardening. Some of the harvest was sold and reinvested in gari production. This year, according to the women, a large area of the inland valley swamp will be cultivated in addition to the vegetable and gari production.

The Secretary of the group, Joseph Alpha extended appreciation to Fambul Tok for a donation of a brand new cassava processing machine to the women last year