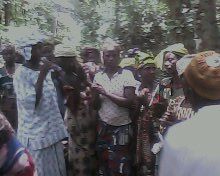 The perception of many elites, especially in sub-saharan Africa, is that people cannot contribute positively to any development program if they have not been formally educated. Even though millions of people have various talents and could contribute to the development of  their various communities in one way or the other, the elites continue to disregard their efforts and always see them as unimportant.

The notion that only the educated will strive is being challenged as illiterates have shown to the world that they can contribute even more than the elites.  This has been demonstrated in many parts of the world, especially in Sierra Leone where mostly-illiterate middle-aged women have been trained to become, for example, solar panel engineers.  It is being clearly demonstrated in the Fambul Tok program as well, where women are demonstrating great capacity in things like reconciliation, communication and listening skills, mediation etc.  Through the Peace Mothers program, they are also playing important roles in development, and gaining more confidence in their ability to be important contributors to their communities.

Feijia village, in Njaluahun chiefdom, Kailahun district in the far east of Sierra Leone is one of the communities that attests to the reality that illiteracy is not a stumbling block to progress.

Among the Peace Mothers in Feijia and surrounding villages, virtually 100 percent cannot read and write and have never sat in a classroom. But that did not stop them coming together to take on important development projects in their section.

The Vice Chairlady of the Peace Mothers in Feijia, Madam Fatmata Musa, said that women can do more than men. She said most people assume that illiterate people are not important, adding that they have the perception that only those that are educated could play active roles in every sphere of life.

“Initially we thought that we are not important for the fact we cannot read and write.  But we have realized that we are a great force to reckon with,” Madam Musa stressed.

One of the members, Lucia Ansumana, was enthusiastic and said had it not been for Fambul Tok, they would not have realized their roles and responsibilities and equally their importance.

Madam Fatmata Keifala spoke about plans for next year, adding that they intend to do more.

“We have harvested our groundnut farm and the community farm is in progress,” she said. “We have divided the yields into two,” she continued.  “One part will be sold so that the proceeds would be shared among women to held their children as school reopens very soon.”

Also in Kenewa village in Luawa chiefdom, Kailahun district, Peace Mothers have planned to assist their children through the proceeds of their yields.  This is becoming a very common story in almost all of the nearly 100 Peace Mothers groups.