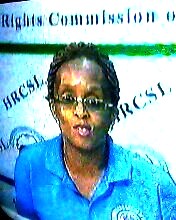 Commissioner of Sierra Leone’s Human Rights Commission (HRCSL) has acknowledged the work of Fambul Tok  in the country.

Yasmin Fofanah (nee Jusu Sheriff), answering questions from the public on the nation’s TV on October 7, 2010, commended Fambul Tok for reconciling people and communities. She went on to state that Fambul Tok should step in to ensure that Sierra Leoneans dialogue in a family way, put the bad chapter behind and find a way forward for the development of the country.

Commissioner Fofanah emphasized that Fambul Tok is doing the ‘right job at the right time’ as the country is still grappling with those things that caused the eleven-year war that left thousands dead.  She referred Sierra Leoneans to Fambul Tok, adding that it creates space for family dialogue.

Mrs. Fofanah is one of the vibrant human right lawyers in the country. She is also a member of the Mano River Union Women’s Peace Network that consists of women from Liberia, Guinea, Ivory Coast and Sierra Leone.