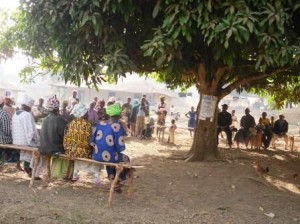 Heremakono section, in the Wara Wara Yagala chiefdom in Koinadugu district, in the north of Sierra Leone has been passed by over and over by aid organizations helping neighboring communities.  The section, which is situated along the Makeni-Kabala  highway has only four villages, and is just about 3km to the district headquarter town of Kabala.  It is common for communities close to cities and located along highways to be left out, as aid organizations assume they can handle issues themselves and focus on more remote areas.

In November, 2010, Fambul Tok entered Heremakono section. After a stakeholders’ meeting, training and sensitisation, the community held its traditional ceremonies. During sensitisation sessions, many villagers said their section is underdeveloped and said no organisation has come to their aid.

Just two months after their ceremonies, a local non-governmental organisation-FUTURE IN YOUR HANDS for the very first time convened a meeting with Heremakono community and has started its savings project (Osusu).

During a visit to Heremakano, chairlady of the women, Madam Mbalia Koroma  said since their traditional ceremonies, which brought them together in unity, their situation has changed

“We are now proud of making savings from our little earnings. This is the fact that we have forgiven ourselves and now work as one family. If Fambul Tok did not bring us together it would have been very difficult for the NGO to work with us.  I think our ancestors have accepted us once again,” Koroma disclosed.

The section chief, Pa Koroma, testified that things are better now as compared to last year. He said they used to have lots of problems with cattle rearers but that these have minimised after Fambul Tok ceremonies.

The women of the section have decided to form the women’s support groups (peace mothers) at the end of January. They also said they plan to do vegetable gardening in the dry season.