Executive Director of Fambul Tok International–Sierra Leone, John Caulker, says the reconciliation process championed by his program will go down the drain if politicians continue preaching hate speech and negative messages during the country’s electioneering period. 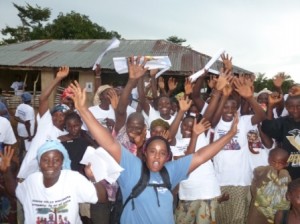 “Fambul Tok as a reconciliation organisation is very much concerned  and we are really frustrated over the use of hate speech by politicians as our efforts in reconciling people across the country will be worthless if anything negative crops up before, during and even after the November 2012 polls,” John Caulker lamented. 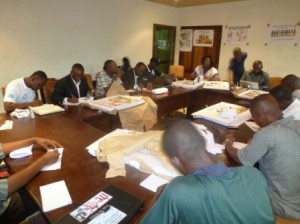 He made the remarks during a press conference on Monday, October 29, 2012, as he addressed the media on Fambul Tok activities, especially towards its efforts in the forthcoming elections.

He said that if Sierra Leoneans want a country that is free from conflict, then they should refrain from the use of hate messages that have the potential to invoke trouble and other forms of violence. 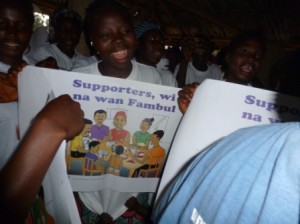 Mr. Caulker reminded media practitioners of their responsibility to report objectively and impartially in condemning anyone that propagates hate speech, adding that such utterances have the propensity to degenerate into violence. He went on to state that Fambul Tok expects politicians to be preaching their party’s platform in order to win the hearts and minds of Sierra Leoneans rather than resorting to negative statements.

“We have put all our resources together to engage in peaceful sensitization activities in the country so we don’t want to see a situation where our resources and efforts will be in vain because of violence in the electioneering process,” Caulker emphasises.

He touched on his recent visit to the United Kingdom where he addressed students at the Hilford School in London. He also mentioned on-going academic discussion done in collaboration with Academia–Sierra Leone.

Head of Peace Mothers, Fambul Tok, Micheala Ashwood spoke about recent activities of Peace Mothers in Kono and Kailahun. She disclosed that 56 Peace Mothers have been trained as community peace ambassadors to relay peace messages in their various communities. 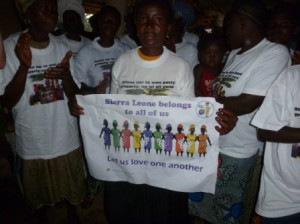 interpreting the posters in Faada,Gbense chiefdom

Ms. Ashwood said that the primary responsibilities of the ambassadors are to maintain peace and to link with stakeholders in the electoral process to ensure violent-free elections. She mentioned the recent chiefdom meetings in Fiama and Gbense in Kono district where Peace Mothers contributed and vowed to preach peace in their various communities. The peace mothers will also meet the District Code of Conduct Committee members and the Sierra Leone Police to learn about their roles in the electoral process.