Peace mothers in Lower Pemba, Malen chiefdom, Pujehun district have recently received a generous gesture from one of the traditional chiefs in that part of the country.

Chief Swaray Dauda of Gadorhun village was the first individual to donated five gallons of locally-produced palm oil to the new Peacemothers group in Lower Pemba section. The reason, according to the women, was to help them embark on an inricate soap-making process.

In his address to the new group, Chief Dauda expressed a  willingness to continue to support women gearing for development in the chiefdom. He said that Fambul Tok is the first organization to bring people together in the interest of peace and reconciliation, adding that the community had not been working together since the war ended. He called on other organizations to support women’s activity in the country. 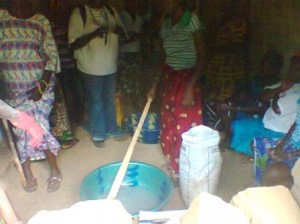 Mixing paste to mold into soap

The Chairlady of Peacemothers in the section, Fudia Moigua, expressed gratitude to Chief Dauda, calling on other philanthropists to boost women.

She explained that they have also contributed some assistance for the soap-making activity, adding that they are now producing locally made soap for sale throughout the community.

Peacemothers receive their donation from the village chief

Meanwhile, the new group, with membership from all six villages, meets every Friday and each member contributes 1,000 Leones. They also intend to embark on bread production when they have raised enough funds.

Other Peacemothers groups in the district also intend carrying out agricultural activity, modeled after the successes of Peacemothers projects throughout the country.