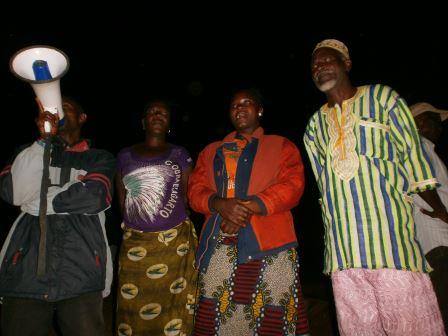 Senesie, a former fighter of the defunct Revolutionary United Front of Sierra Leone is eager to return to his homeland in Kpanga Kabondeh, Pujehun district, in the south of the country. Senesie’s quest to return home was expressed by his sister, Baindu Kamara, during a bonfire on March 15, 2014, at Wombe village in Kpanga Kabondeh chiefdom.

Testifying before hundreds of villagers, Baindu disclosed that her brother caused a lot of havoc during the war in that part of the country, adding that she has been confronted on several occasions by individuals about her brother’s acts.

Baindu apologized on behalf of her brother and asked everyone whom Senesie had wronged to forgive him in the spirit of reconciliation. The reconciliation committee echoed Baindu’s plea and asked local authorities to forgive Senesie. Baindu also requested Fambul Tok to in assist Senesi’s return home, so he can openly apologize. Senesi is presently staying in one of the chiefdoms in the district.