Youth from all sections in Soa chiefdom, Kono district have undergone intensive training on different topics in peace building to avoid violence and other forms of bad social behaviors in their communities. 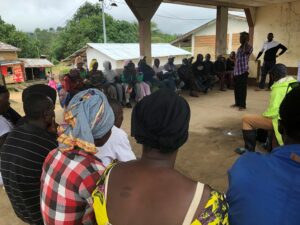 dom is part of “The human security project” supported by UNDP and FAO.

In his welcome address, chiefdom youth leader Peter Foyoh said ‘youth are very happy to see young people gather together in the interest of promoting peace in the chiefdom’. He said ‘Soa chiefdom administration is one of the chiefdoms that takes youth and women activities into consideration’. He said: ‘every section has female authority to close the gap of gender equality’.

Giving a background of the human security project, Fambul Tok Project Officer Solomon Yarjoh said the project would be implemented in Soa, Kamara and Gbense chiefdoms that face multiple challenges and vulnerabilities. He said the youth ambassadors training will strengthen young people to understand conflict and would be able to promote peace and social cohesion.

Issa Kamara, one of the facilitators dealt on the issue of rights of youth. He mentioned that according to the National Youth Policy document of 2007, a youth is any young person (male or female) within the age bracket of 15 and 35 years.

He said youths have certain rights and responsibilities as stated in the Youth Policy document.

The rights include the following: Right to life and proper growth and development as a person; Right to vote and participate in politics; Freedom of speech; Freedom of assembly and association; Protection against cruel and unusual / inhumane treatments; Right to be gainfully employed (if qualified).

He said youth have several rights but go with responsibilities such as abiding by the rules and regulations of their society, promoting peace, unity and stability of their communities or chiefdoms (serving as peace ambassadors or agents of peace and reconciliation) and contributing to the socio-economic development of their communities and the nation as a whole among others.

The facilitator explained that youth have roles in promoting community peace and social cohesion as sensitizing their peers on the importance of peace, unity and stability of their communities and the nation through various activities.

One of the sectional female youth leaders, Sia Sandy said the training is very important to youth, especially as elections draw nearer in two years time. She pointed out that most times young people are used by politicians for violence. They give drugs and other things to young people to perpetrate violence.

Chiefdom women’s leader, Haja Fatmata Yarjah cautioned participants to take the session serious, adding that violence erupted in the chiefdom due to problem in one of the sections that resulted in the burning down of houses. She said everyone wants peace and stability in the chiefdom.

Chiefdom youth leader, Peter Foyoh encouraged participants to always mingle with each other to help promote peace and social cohesion.

After the training ended, the new ambassadors promised to work with everyone when they return to their communities.