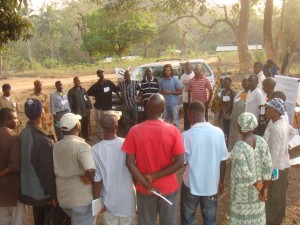 As Fambul Tok community reconciliation project continues to gain momentum in Sierra Leone, it continues to expand its activities in the country.

Kono district, one of the districts that was badly hit during the rebel war has recently embraced Fambul Tok because of its use of traditional methods in reconciling communities.

The project was launched in Kono last December with re-consultation to sound the opinion of people in all the 14 chiefdoms in Kono as to whether they were ready to reconcile. The session gave an opportunity to them to speak out and at the end of it all, they agreed to reconcile.

Last week, representatives of all 14 chiefdoms gathered in Tombodu, Kamaa Chiefdom for two-day training in various topics relating to reconciliation process. The training was facilitated by Robert Roche of Catalyst for Peace, Francis Onyekwue, a consultant, and Momodu Kamara of the Training unit of Fambul Tok project. Some of the topics dealt with included trauma healing, resilience, communication and listening skills.

In his remarks, Executive Director of Forum of Conscience and also Programme Director of the project, John Caulker said Fambul Tok belongs to communities. He urged them to own the process.

“Fambul Tok is a train that moves. It starts slowly but if one vital thing is missing it cannot go further,” Caulker stressed, adding, “all of us should put hands on deck so that the reconciliation process will flourish in Sierra Leone.” The Director went on to state that reconciliation is not an event but a continuous process.

Meanwhile a series of trainings for reconciliation committees and outreach members in all sections in the 14 districts will be conducted before the end of February.

A district executive of Fambul Tok was formed so that they would spearhead the activities of Fambul Tok in their district and inform their various chiefdoms about the process. The executive is to be chaired by Chiefdom Speaker, Aiah Raymond Komba of Kamaa Chiefdom.