Sometimes we only discover a review of Fambul Tok well after it was written.  This one, written prior to our screening at the Heartland Film Festival in October, is one such recent find.  Because of the way it describes the film’s more universal significance, we wanted to  share it with you here. 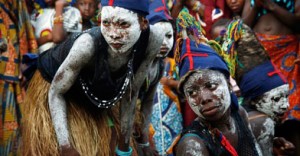 Here’s the review, by Richard Propes, as published in The Independent Critic:

<<Every year, it seems as if Indy’s Heartland Film Festival recognizes at least one film with a central theme of forgiveness. In 2011, Heartland presented a Crystal Heart Award to Sara Terry’s highly acclaimed Fambul Tok.

Fambul Tok, Creole for “Family Talk,” isn’t likely to break any box-office records but it is one of the 2011 Heartland Film Festival’s most profoundly moving and inspirational feature documentaries. Sierra Leonean John Caulker created the Fambul Tok organization in an effort to address the intimate and cultural wounds caused by a decade of civil war in the nation of Sierra Leone.

The process itself seems simple. Yet, in a world that can so often be obsessed with an “eye for an eye” justice it can also seem rather absurd. Fambul Tok refers to a process of village-wide gatherings around bonfires – where victims of violence are free to confront perpetrators of violence but, in turn, they are to offer immediate forgiveness when such forgiveness is sincerely sought.

Could you do it?

Could you simply “forgive” if you were a child who had been raped?

Could you simply forgive if someone had mercilessly butchered your entire family? If someone had disabled and blinded you?

What’s surprising is how deeply moving these confrontations are and, in turn, how sincere and celebratory these simple acts of forgiveness become as families are healed, villages are united and, one by one, this war-torn nation begins to experience tremendous healing.

Director Sara Terry follows Caulker throughout the nation as he works to convince local villages to attempt this ritual, a ritual that feels very similar to the teachings of Desmond Tutu. The film also brings to mind a Heartland Film Festival flick from a few years back, Forgiving Dr. Mengele, a feature doc telling the story of Eva Mozes Kor and her proclamations forgiving those who imprisoned her during the Holocaust including Dr. Mengele himself. While that film felt, at times, self-promoting and a bit grandiose, Fambul Tok’s power comes in the actual stories and it never feels like it’s over-glorifying Caulker’s efforts.

The film is beautifully photographed by Henry Jacobson, who nicely weaves together imagery that captures both the intimacy of the village and the global implications of the matters at hand. We are never allowed to forget the complexities of the violence that has occurred in Sierra Leona, but Jacobson and Terry work together to give the film a tremendous  sense that it is by returning to the nation’s communal foundation that true healing will occur.

With Fambul Tok, Sara Terry has done what is nearly impossible for filmmakers by approaching her subjects from a place of tremendous humility. Rather than coming in as American rescuers or with the usual Western mindset, Terry wisely steps back and allows for a culture of restoration, healing and hope that may very well seem foreign to most Americans. Americans might profess an awareness of such spiritual disciplines as confession and forgiveness, but Fambul Tok is extraordinary because it makes these things not just spiritual disciplines but an integral part of communal living.

For more information on Fambul Tok, visit the Fambul Tok website. The film will be showing at 7pm on Friday, October 21st at AMC Castleton in Indy as the Heartland Film Festival winds down. >>