Fambul Tok International-Sierra Leone has been following recent discussions and pronouncement surrounding doubt about the overall conduct of the March 7th 2018 general elections that warrants some attention as a peacebuilding organization.

It could be rccalled that the National Electoral Commission earlier this year declared March 7,2018 as the date for the conduction of Local Council,Parliamentary and Presidential elections. 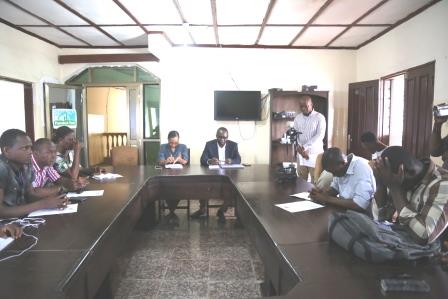 Members of the press listening to the Executive Director John Caulker

After this pronouncement,Fambul Tok has observed with grave concern,divergent opinions,statements and counter statements from various political parties including the All People’s Party(APC) and the main opposition Sierra Leone People’s Party(SLPP) regarding issues relating to the proper conduct of next year’s general elections.Similar views are being echoed by some sections of civil society.

Fambul Tok will like to remind our political leaders that maintaining the peace of this country largely depends on the conduct of a credible and fair elctions and they therefore owe it to citizens of this country especially women and children.We are therefore appealing to their good conscience to see reason and seek an acceptable compromise as a solution that will guarantee and allay the fears of the general public about the process itself,rather than ignore the concerns that will ultimately sow seeds of elections related conflict and undermine the credibility and legality of the entire elections process.

Fambul Tok International-Sierra Leone,a Sierra Leonean peacebuilding organization,therefore calls on the Government,political parties,the Political Parties Registration Commission(PPRC),National Electoral Commission(NEC),Civil Society organizations,religious leaders and the International Community to engage in a frank and hard conversation that will lead to a lasting and acceptable solution regarding these legitimate concerns.