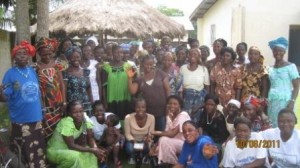 Peace Mothers pose for a group portrait in Moyamba

Fambul Tok continues to create space for people to meet, discuss and find a way forward — together. For the past two weeks, Fambul Tok organized interactive sessions for Peace Mothers groups in Kono, Kailahun, Moyamba, Kono and Bombali districts.

According to the Executive Director of Fambul Tok International, John Caulker, the purpose of the interactive sessions for Peace Mothers is to create a space for women to discuss pertinent issues, share ideas and experiences and overcome the challenges facing them. “The conflict in Sierra Leone divided families and communities. After the war there was no forum for people, especially women, to meet and discuss issues affecting them, so Fambul Tok is creating this space for them  so they could know each other, mingle and interact for the very first time,” Caulker stresses.

He emphasizes the fact that “Fambul Tok addresses the roots of conflict at the local level, walking alongside war-affected individuals as they reflect on the past in ways that enable them to be part of averting renewed aggression. Grounding reconciliation in traditional practices also helps create healthy communities capable of building new foundations of peace.”

These sessions are geared towards consultation, recounting past activities, experience-sharing, and fostering peace to enable them overcome the challenges facing them in their 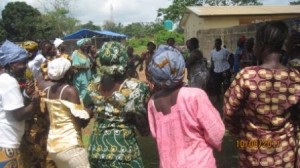 communities. During debriefing, Peace Mothers shared their experiences with the goal of  learning new things from one another.

According to Sia James of Woama village, Tankoro chiefdom, Kono district, many initially thought that the group would be shortlived because of the perception that women would not be willing to work together.

Edith Jarfoi of Gorama chiefdom, Kono district says that because the women are now working together, they have benefited from an international organisation that provided them with a rice mill. 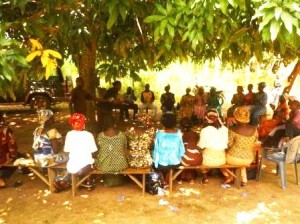 Peace Mothers gather for an intensive session in Kabala, Koinadugu

traveled over two hundred miles through rugged roads to meet their colleagues, they had renewed energy anytime they came forward to share their experiences. One of them, Esther Conteh from Wara Wara, Bafodia chiefdom says she was happy for the fact that she had never had the opportunity to take part in such activity.

‘We are happy because this is the first time we are visiting Kono, Kailahun and Moyamba,” Esther says.

One of the women in Moyamba district, Memunatu Sillah, says they have sold their proceeds but have no idea of what to do with the money. She says she has gained an idea from other women to do business — Madam Jeneba, from Moyamba, taught her colleagues how to plant ginger.

The Kailahun women touched on the aspect of upland farming and other techniques in entering the palm oil trade. The women also paid an exchange visit to Shenge town, a centre for fish trade in Moyamba district, to learn how to work in the fishing industry. Kono women boasted of how beneficial ‘konso beans’ and other crops have been to them.