The session was organized by World Food Program together with communities and partners to identify issues and tailor program responses to local requirements.

It puts different sociological and economic group representatives in the driving seat of designing and planning multi-year and multi-sector interventions, contributing to their resilience building, to achieve their mission. The sessions were held for community members in Lower Banta chiefdom.

According to WFP’s Adama Kamara the sessions were held that would lead to a community action plan outlining and prioritizing activities and resource needs to build resilience.

Fambul Tok International’s project officer Solomon Yarjoh highlighted what the organization has been doing since last year. He said Grievance Redress Committees have been set up in Lower Banta, Upper Banta, Malen and Makpele chiefdoms under the UN Peace Building project funded by UNDP and WFP.

He said as the project comes to an end various sessions have been held seeking the views and opinions of youth, women and chiefdom stakeholders on issues raised in various chiefdoms. He added that actions would be taken by various bodies including the government on the outcomes of those sessions.

Representing Office of the Vice President, Swalihu Jusu admonished community members to put hands on deck to continue working as GRCs or farmers.

He said the Office of the Vice President will support the best farming communities in the farming project and present them with certificates for their hard work.

Ministry of Agriculture, Bob Sheriff explained the role of his ministry in the project. He said farmers would be supported through various means to ensure strict adherence to regulations on quality farming processes.

Representatives of other ministries and agencies also spoke on what they have been doing to support the Peace Building project. 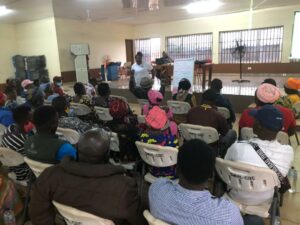 At the end of the sessions, community members drew up plans and highlighted things they will be doing to support development in the next 4 years.