Fambul Tok International-Sierra Leone with support from the Government of Sierra Leone,UNDP and Food and Agricultural Organization has ended sessions on a new project “Strenghtening Human Security Program” in three chiefdoms in Kono district 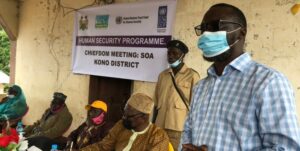 This new project targets Soa, Kamara and Gbense chiefdoms and will address peace and development challenges and vulnerabilities in these chiefdoms that face poverty,food insecurity, unsustainable mining practices and others that have caused problems in those areas

Giving an overview of the project,Fambul Tok Executive Director,John Caulker will look at community co-existence and social cohesion with a focus on working with youth and women groups live as one getting to accommodate each other as a community.He assured that activities including football games annual carnivals would organized to promote social cohesion in all project chiefdoms

He said community in all project areas will set up Grievance Redress Committees with the   aim to addressing minor conflicts that will arise in villages and sections. He went on to state that the presence of formidable structures would help these communities to strengthen orientation to addressing community issues and enhancing development interventions

Paramount Chief of Soa chiefdom,Emmanuel Foryoh expressed happiness over the project and said since he became traditional leader he had not failed his people.

In Kamara chiefdom Chiefdom Speaker,Rev. Pessima  on behalf of Paramount Chief stated that Fambul Tok is not new in the chiefdom recalling activities of the organization to bring peace in communities.

In another development,sensitization sessions  for the selection of Grievance Redress Committees in every section in the three chiefdoms will be done before the end of August