Fambul Tok International joined the people of Koinadugu District to commemorate March 23, the day the civil war started in Sierra Leone. The communities and Fambul Tok have been advocating to the government to mark this day as a National  Day of Reflection and Healing. This day also marks Fambul Tok’s  second anniversary. Two years already!!! 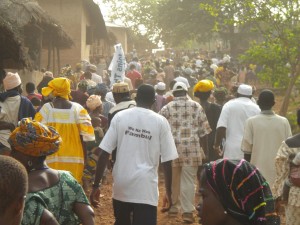 The people of Koinadugu village, where the district name originates from (Koina means groundhog and dugu means land) came out in large numbers, over 2,000. People came from the surrounding villages, over 10 km away, to witness the event and partake in the first healing ceremony. They welcomed each other with traditional songs and dances, a practice that had been lost due to the war. 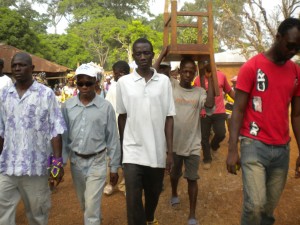 That night, March 22nd, over 15 victims came forward to testify.  Many of the testifers were women, and their stories from the war included being raped or witnessing their husbands been killed. The offenders also came forward to confess and apologize for the atrocities they committed.

In speaking of his time as a rebel fighter, one perpetrator remarked, “I did not join the rebel movement on my own volition. I was given cocaine and other forms of drugs to commit the atrocities, I was a little boy then.”

Throughout the night, victims were accepting the apologies of the offenders, often saying they were doing so in the interest of peace and reconciliation. Fermusu, one of the victims, said, “They are our brothers and there is no bad bush to throw away those that hurt us. The only option is to forgive them and accept them in our communities.”

The following day, March 23rd,  Fambul Tok and community representatives held a press conference for the second year anniversary , which was chaired by Paramount Chief Alfred Banya from Moyamba district. Chief Banya, District Chairman for Moyamba District, and other Paramount Chiefs traveled from different parts of Sierra Leone to share their experiences with the people of Koinadugu. Chief Banya urged the people of Koinadugu district to embrace Fambul Tok because it belongs to them and it is the only organisation healing communities after the end of the conflict. 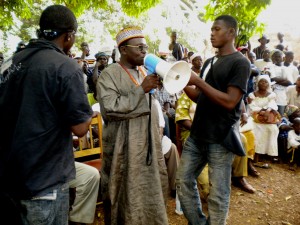 Traditional leaders join in to celebrate in Koinadugu

The occasion climaxed with the pouring of libation, followed by a football match, and a late night disco. Kids were allowed too!