Had it not been for the presence of Fambul Tok staff in Nyeama, one of Fambul Tok’s new sections in Jawie chiefdom, Kailahun district, the whole community would have blown up into total chaos. It all came about when local authorities brought in chiefdom police officers to arrest villagers who haven’t yet paid their local taxes. Prior to the arrest, authorities presented the names of defaulters to the police and as soon as they arrived in Nyeama village, they sprung into action. 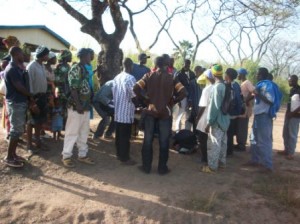 A group of youth express their frustration with police processes

Defaulters were handcuffed and locked up in dirty cells. In less than an hour, several villagers who have just returned from their farms were arrested. As the news of the arrest spread like wildfire in the village, youth numbering over 30 converged on the village centre and decided to counter the actions of the police. In just five minutes, the whole township flew into chaos as people were running all over.

Luckily, Fambul Tok staff intervened and calmed down the angry youth. One of the young men expressed disappointment in the local authorities, adding that they would have saved the situation had they (tax payers) be given prior notice. Fambul Tok staff then called on authorities to see reason and give defaulters some more time to pay up.

An agreement was reached and a grace period given to the defaulters. Fambul Tok also called on the youth to remain peaceful and not to take the law into their own hands, assuring the community that fair justice processes would prevail in the future.