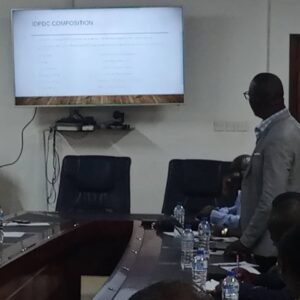 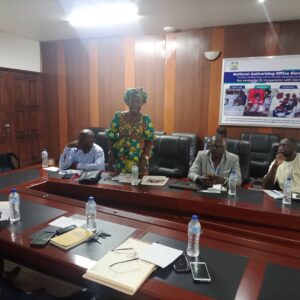 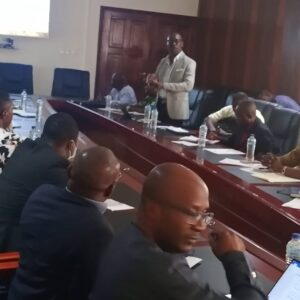 MoDEP Heads of Departments in Discussion

Fambul Tok John Caulker explained about the lessons learnt in setting up and running of the inclusive district peace and development committees in the pilot districts of Koinadugu, Kailahun and Moyamba. He emphasised the role of the community in sustaining the structures in the community and at the district level.

MoDEP Acting Deputy Director of Rural Development Mbalu Kamara explained the role and composition of the DDCC and possible areas of integration and differences, particularly on the Women and Youth representatives.

Director of Planning Dr Sheka Bangura said the IDPDC/DDCC is just one layer in Wan Fambul National Framework, and the Framework is a government own process. He noted adjustment should not be a problem as the IDC is just a pilot in 3 districts which are going to phase out as government re-establishes DDCCs across the country.

The chairperson said the component of peace building must be included in the TOR of the DDCC and Fambul Tok should continue to work at the community and chiefdom level to provide linkages with the district level DDCC. He called for inclusion of more women in the DDCC.

Director NGO Affair s in MoDEP Eric Massalay said the work of FT is laudable and he sees no problem in the transformation of the IDPDC and DDCC. He stressed the need for more work at the community and chiefdom level.

The development partners called for another meeting to discuss for integration of IDC work into the DDCC and look at the gap between Village, chiefdom and district level. They said the meeting was helpful in creating a broader understanding of Fambul Tok’s work in the peace and development of Sierra Leone.