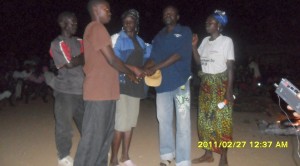 A former rebel commando of the Revolutionary United Front (RUF) has chosen a new path to life, transforming from a once dreaded gun-wielding fighter to a born again christian and eventually a Pastor in his village.

In his testimony during the Fambul Tok reconciliation ceremony in Nyadehun village, Luawa chiefdom, Kailahun district, Mattia,whose bush name was ‘Commando Agama’, said he regretted joining the the then fighting forces. He narrated how he was captured by RUF rebels and due to threats of being executed should he attempt to escape, he decided to stay with the movement.

Pastor Mattia, as he is now known, apologized to all those he had wronged during the war. He said since he returned to Nyadehun village after the war, he has continued to work with his people to develop the area and its environment.

‘We are working together as brothers and sisters; the only problem was that I did not have the opportunity to apologize to my people for what went wrong but since Fambul Tok has created that space, I want to use this opportunity to say sorry and ask for forgiveness,” he appealed to his audience.

One of the victims that accused Mattia, said even though he lost his brother during the war, he is still willing to forgive Mattia.