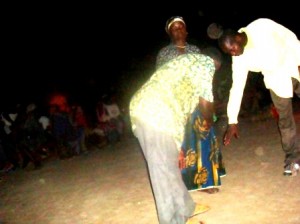 Gibril (left) bends down to apologize

A former rebel of the now-defunct Revolutionary United Front (RUF) of Sierra Leone has openly apologized and asked the people of Kailahun district to forgive him, adding that he was, in one way or another, responsible for launching deadly attacks on local villages during the war.

In his testimony, Gibril revealed how he launched RPGs on villages in Kailahun district before his troops attacked. He said that during that time, hundreds of villagers in different locations were either killed or lost limbs as a result of his grenade attacks.

He told the gathering that because of his assumed bravery, he was appointed to the Military Police and was assigned to a check point in Pendembu, about 10 kilometers to the east of the provincial town of Kailahun.

Gibril went on to state that he regretted his actions and asked anyone he had wronged to forgive him in the interest of peace and reconciliation.

One of his victims, Saffa Musa of Koyayeima village, testified that he was captured and beaten mercilessly by Gibril, who later confiscated all of his property. Jattu, a young woman who was present, explained that Gibril had forced her father to look directly at the hot burning sun, which made him partially blind.

After the testimonies, Gibril showed remorse and promised that such actions would never occur again. He asked for forgiveness, and the victims accepted his statements and agreed to reconcile with him.