Piloting the establishment of the Village Development Committees in Moyamba and Koinadugu districts,a total of four villages(Benduma and Komende)  Bagruwa chiefdom,in Moyamba district,

The importance of forming VDCs, is a new initiative by  Fambul Tok  to cascade the Peoples Planning Process  to village level with the aim of ensuring local ownership.Selected committee members will work with villagers to promote the welfare and well being of individuals and the whole community.They will also monitor implementation of village development priorities and needs taking into consideration the right of vulnerable groups 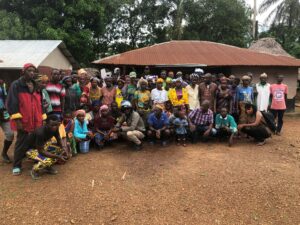 Training of CWMC/Peace Mothers in Koinadugu

Before the formation of the VDCs in all four villages,training of Community Welfare and Mediation Committee members and Peace Mothers representation from each village were completed.They were accompanied in their various villages to explain to other villagers the importance of forming village development committees.Discussions with various groups,youth,traditional leaders and women were held to get their knowledge and input on readiness for the new initiative

General village meetings were conducted by CWMCs and Peace Mothers to inform people of VDC formation drive and what each village stands to gain.Fambul Tok staff served as observers allowing trained animators to take the lead.Villagers unanimously agreed to accept the initiative.The animators also worked with villagers to develop terms of reference and qualities specified for anyone that wanted to contest.Selection processes went on smoothly as participants wrote names of nine people on piece of paper and deposited them through secret ballots.Selection of VDC Members was done openly and transparently and highest scorers announced as conveners of the very first meetings in each of the villages 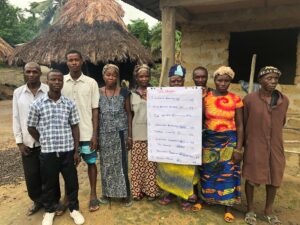 Benduma VDCVDC members in the two villages in Sengbe and Wara Wara Yagala chiefdoms have met and a three- man executive such as chairman.secretary and treasurer formed.Benduma village has also had their first meeting and an executive formed.Komende village VDC will meet this week and executive positions would be formed