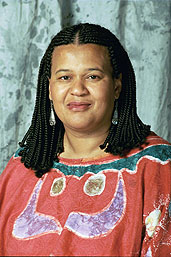 Passionately dedicated to the written word and to human rights, writer and activist Elinor Sisulu has a natural affinity for the work of Fambul Tok—both as a storyteller and as an advocate. As a scholar, she brings keen insight into the forces shaping policy around development assistance and in particular, the lives of women in developing countries. At Fambul Tok International, we are delighted to welcome her to our Advisory Board.

Born and raised in Zimbabwe, Elinor’s studies include history, English literature, development and feminist theory. She completed her first two degrees at the University of Zimbabwe and studied at the United Nations Institute for Economic Planning and Development (IDEP) in Dakar, Senegal.  She obtained her MA in Development Studies at the Institute of Social Studies in The Hague, Netherlands.

As an academic researcher in the Department of Research and Development in the Ministry of Labour in Zimbabwe, she published studies of women’s work and development assistance. This included a major study for the Norwegian Agency for Development Cooperation that was later published by the Southern African Political and Economic Series as Women in Zimbabwe. She then worked for the International Labour Organisation’s Lusaka Office on ILO programs of assistance to the African National Congress, Pan Africanist Congress and the South West Africa People’s Organisation.

Elinor has also worked as a freelance writer and editor, and served as Assistant Editor for SPEAK, a black feminist publication. In 1994 she wrote an award-winning children’s book about the first democratic elections in South Africa entitled The Day Gogo Went to Vote. Her biography on her parents-in-law, Walter and Albertina Sisulu: In Our Lifetime secured her the prestigious 2003 Noma Award for publishing in Africa. Time Warner Books published the book in the UK in November 2003. Elinor is passionate about children’s literature and played a key role in establishing a Southern African children’s literature foundation.

Elinor is an advisor and political analyst on Zimbabwe and was instrumental in establishing the Crisis Coalition of Zimbabwe’s South Africa office. She worked for the Crisis in Zimbabwe Coalition and chaired the Open Society Initiative for Southern Africa board and served as a board member of  the National Arts Festival Committee responsible for the Grahamstown festival. She lives in Pretoria with her husband Max and three sons, Vuyisile, Duma and Sandile.

Elinor Sisulu’s perspective on our program will be invaluable as Fambul Tok continues to expand in Sierra Leone and beyond, and her voice will be invaluable in sharing the stories of peace that flow from our work. We are grateful to welcome her to our circle.