Fambul Tok has conducted training sessions for community members in three chiefdoms in its efforts to complement the work of the Koinadugu District Health Management Team, the district ebola task force, and other partner organizations in the fight against ebola in Sierra Leone. 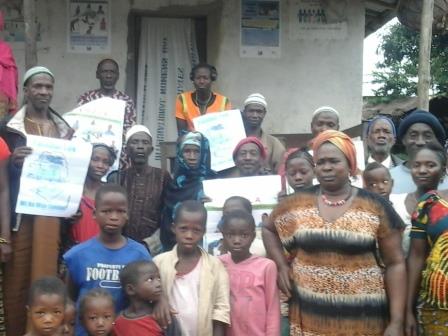 The purpose of the trainings, which ran from September 5-7, was to the raise the awareness level of community members, especially those within Fambul Tok leadership positions (contact persons, Peace Mothers, peace club members, etc.). The Fambul Tok leaders were given necessary tools and information to sensitize their various sections towards the prevention of ebola in the district.

According to Fambul Tok’s  Rev. Emmanuel Mansaray, most people in Koinadugu district do not have access to basic information. He says that some communities do not even have access to radio and other forms of communications. Fambul Tok deemed it fit to reach out to communities to educate them about ebola; Fambul Tok spoke about how ebola is spread, prevented and the role of the communities in containing the disease. Rev. Mansaray says regular hand washing, avoiding large gatherings and avoiding body contacts go a long way to prevent the spread of the virus. He also stressed the role of community members, adding that they should report to health authorities if someone  showing symptoms of ebola such as vomiting, frequent stools, and high fever. He advised the community that whenever someone shows such symptoms family members should not have contacts with that person’s body fluids and health officials should be informed immediately.

Rev. Mansaray stated that Koinadugu  remains the only district in the country with no reported case of ebola since the outbreak.  However, he emphasized that this does not mean people should relax. Rev. Mansaray went to say that Fambul Tok is holding the trainings in case the virus sneaks into the district. 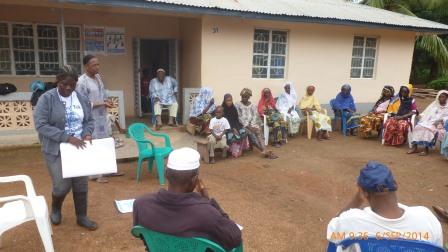 “Fambul Tok always consults  communities in whatever it wants to embark on because communities have answers to their problems. That is why we are training you so in return you could sensitize others in your various villages,” Rev. Mansaray disclosed.

In his remarks, Alhaji Abubakarr Jalloh, section chief of Dogoloya, pointed out that though most muslims regard the practice of hand shake as very important, it should be considered as not mandatory. He therefore appealed to his people to follow the necessary  precautions given by health authorities.

Madam Mbalia Koroma, acting section chief of Heremakono, extended appreciation to Fambul Tok for being the first organization to conduct such training session in their communities. She stressed that the trainings go “a long way as our people are now aware of the existence of the disease in the country”.

The trainings would be replicated in other chiefdoms.