District Local Council chairmen of Moyamba,Kailahun and Koinadugu  have unanimously agreed to cascade the People’s Planning Process(PPP) to all chiefdoms in the three districts and with the best practices and learnings the process will be rolled out to other parts of the country.The PPP is design to ensure that policy makers,project implementing organizations and other community based initiatives listen to communities and involve them in the post ebola development processes.

Participants at the end of the three days conference in Taiama

This idea was developed to respond to the post ebola prevention,healing and recovery for development of communities

During a three-day inter-district learning and sharing conference on November 10th-12th,2016 at Taia resort,Taiama in Moyamba district,organized by Fambul Tok and Catalyst For Peace,the three chairmen(Prof.Herbert Bob Kandeh-Moyamba,Sheku Samuel Kamara of Koinadugu and Alex Bonafa of Kailahun,after series of discussions with members of the Inclusive District Peace and Development Committees(IDPDC) came to a conclusion to replicate the People’s Planning Process  in all chiefdoms 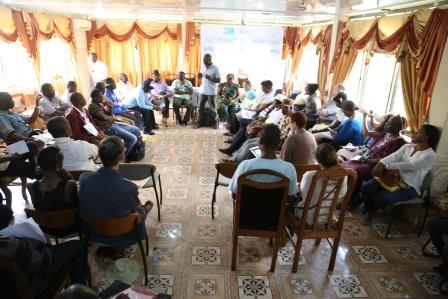 In his contribution,Prof.Herbert B.Kandeh  of Moyamba District Council mentioned that his institution is ready to support the People’s Planning Process in the district for the development of communities.He said it is a good initiative and therefore even in the absence of Fambul Tok and Catalyst For Peace they will not allow it to fail.He stated the successful conduction of IDPDC meetings and peaceful intervention of members to settle the problem between MSF construction construction company and youth.

Koinadugu District Chairman,who chaired discussion sessions on Day one,Sheku Samuel Kamara stated that he will work with his colleagues and other partners working in the district to harmonize the People’s Planning Process into Council’s activities.He mentioned the successes one of which is the construction of a 80 metre bridge that links two districts.He said the project would not have kicked off without the initiative of Fambul Tok community engagements.He extended thanks and appreciation to Catalyst For Peace for supporting the process. 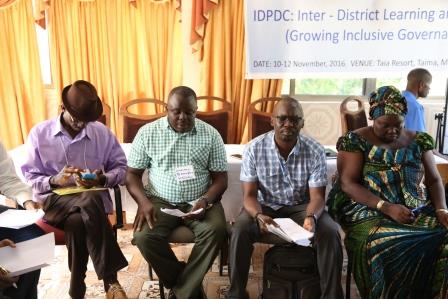 President, Catalyst For Peace, Libby Hoffman gave a brief background of how he came across the founder of Fambul Tok,John Caulker and how the partnership has been strenghthened over the past nine years

Executive Director of Fambul Tok International,John Caulker explained the initiative of the People’s Planning Process.He said it is a product of a nine-year community healing and reconciliation activities of Fambul Tok and Catalyst For Peace.

One of the objectives of the conference was to provide an overview of the People’s Planning Process,and to gain an understanding of the core elements of IDPDC formation,for new and potential partners and for working in new districts